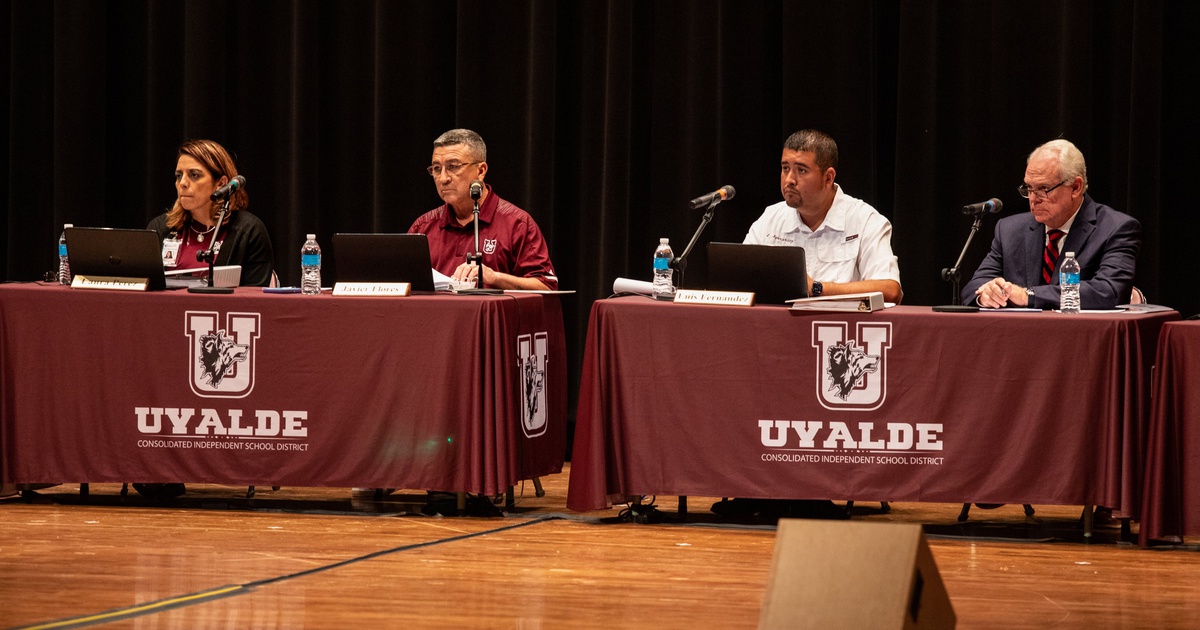 Sign up for The Brief, our daily newsletter that keeps readers up to date with the most essential news from Texas.

The Uvalde School Board at a town hall Monday discussed addressing critical safety issues exposed during the May 24 mass shooting at Robb Elementary that left 21 people dead. But every resident who spoke said their plans were still not enough – and many wondered if some of the new security measures would be tainted by the legacy of the failures that contributed to Texas’ deadliest shooting and the late response from law enforcement.

A Texas House committee’s investigation into the shooting found “systemic failures and gross poor decision-making” by nearly everyone involved who was in positions of power. The House committee report painted a damning picture of a school district that failed to strictly adhere to its safety plan and a police response that ignored its own active shooter training.

Safety plans for the new school year, which begins Sept. 6 for schools in Uvalde, call for 33 officers from the Texas Department of Public Safety to monitor campuses in the district. But administrators at the Uvalde Consolidated Independent School District could not answer questions from residents about whether any of those officers were among the 91 DPS officers who responded to Robb on May 24.

Diana Oveldo-Karau, a longtime resident of Uvalde, told administrators that some of those officers may be among those who waited more than an hour to confront the shooter.

“And I still don’t understand how the school board and administration can believe that just because you have these DPS members on site…expect us to believe that our children will be safe,” Oveldo said. -Karau. “These are the people who let us down.”

Superintendent Hal Harrell said he would discuss the matter with a DPS lieutenant on Wednesday.

More than 350 law enforcement officers from multiple local, state and federal agencies responded to the shooting but took more than an hour to confront the shooter. Law enforcement doctrine dictates that officers confront active shooters immediately.

The Uvalde school board last week fired former school police chief Pete Arredondo, who was widely criticized for his late response. Arredondo was listed in the district active shooter plan as the commander of such an event, but the consensus of those interviewed by the House committee was that Arredondo did not assume this role and that no one no other has replaced it. Arredondo’s lawyer argued that his client should not have been named as incident commander.

But residents of Uvalde have been pushing for officers from other agencies to also face the repercussions of what is widely seen as a catastrophic response. The House committee report said better-equipped departments should have stepped in to fill a leadership vacuum after Arredondo failed to take charge.

Plans to use $15,000 in grants to conduct Wi-Fi audits were also discussed on Monday. The House committee’s investigation also found that the district’s emergency management alert system is not always effective. It works by sending online warnings to teachers and professors, many of whom access it through a smartphone app.

On May 24, not all of Robb’s teachers immediately received the alert about the shooter, in part due to a poor wireless internet signal that made it difficult to send the alert and the fact that many teachers didn’t have their phones or had them turned off. when they received it.

Harrell also said the district plans to upgrade door locks, add more fencing and increase the number of cameras in school buildings. Several witnesses told the House committee that Robb’s employees often left the doors unlocked, while the teachers held the doors open. This was partly due to a lack of keys. In March, the teacher in room 111, through which investigators believe the shooter entered during the massacre, reported to school administrators that the door to his classroom “did not always close”.

Despite all the new security measures mentioned on Monday, neighborhood moms like Laura Garza remain skeptical.

“I get what you’re saying about locked doors, but there are kids in high school walking down the halls all the time,” Garza said. “These are things that need to be looked at, not just physical change, not just doors, but the school system itself.”

The full schedule is now LIVE for the 2022 Texas Tribune Festival, taking place September 22-24 in Austin. Explore the timeline of over 100 insightful conversations coming to TribFest, including the inside track on the 2022 election and 2023 legislative session, the state of public and higher education at this stage of the pandemic, why Texas suburbs are booming, why broadband access matters, the legacy of slavery, what really happened in Uvalde and much more. See the program.