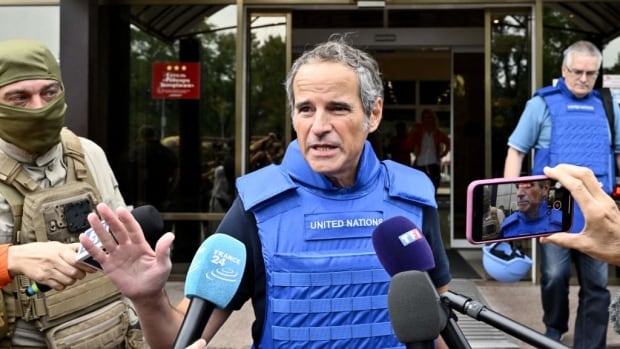 A UN inspection team arrived at Ukraine’s Zaporizhzhia nuclear power plant on Thursday as part of a mission to protect it from disaster, reaching the site amid fighting between Russian and Ukrainian forces that sparked shutdown of a reactor and highlighted the urgency and danger of the task.

The visit of the delegation of 14 experts from the International Atomic Energy Agency (IAEA) came after months of negotiations to enter the largest nuclear power plant in Europe. Arriving in a convoy of SUVs and pickup trucks, the inspectors were led by IAEA Director Rafael Grossi.

Later in the day, Grossi reported that the group had gathered important information at the plant and would continue its assessment. The visit is expected to continue until Saturday.

“My team is staying, and more importantly…we are establishing a continued IAEA presence here,” he said in a video on Twitter, the factory visible behind him.

As the experts walked through the war zone towards the compound, Russia and Ukraine accused each other of bombing the area and trying to derail the visit. Heavy shelling delayed the team’s progress to the factory.

Energoatom, Ukraine’s nuclear power company, said Russian mortar fire shut down one of its reactors through its emergency protection system and damaged an emergency power supply line used for internal needs. One of the plant’s reactors that was not working was replaced with diesel generators, Energoatom said.

“There has been increased military activity, including this morning until very recently,” Grossi said, adding that after being briefed by the Ukrainian military he decided to move despite the inherent risks. “But weighing the pros and cons and having come this far, we don’t stop.”

Grossi, who personally negotiated with the Ukrainian authorities to allow the team’s passage, noted earlier that the risks were “very, very high” in the so-called gray zone between the Ukrainian and Russian positions, but “we consider that we have the minimum conditions for movement.”

“We are taking all necessary steps to ensure that the factory is secure, that it is operating safely and that the mission is carrying out all of its plans there,” he said.

Fighting near factory highlights fears of leak and collapse

Zaporizhzhia has been occupied by Russian forces but ruled by Ukrainian engineers since the early days of the six-month war.

Ukraine accuses Russia of using the plant as a shield, storing weapons there and launching attacks around it, while Moscow accuses Ukraine of firing recklessly into the area, raising the threat of a nuclear disaster that could affect the entire continent.

Fighting in early March caused a brief fire at its training complex, and in recent days the plant has been temporarily taken out of service due to damage, heightening fears of a radioactive leak or reactor meltdown.

IAEA spokesman Michael Amdi Madsen said earlier in the week that the team would assess the damage to the plant, determine the status of its main and backup safety systems and assess the conditions of work of the control room staff.

Experts have expressed concern that staff are overworked and stressed by the occupation of the factory by Russian forces, which increases the risk of a dangerous mistake.

Ahead of the visit, the Russian Defense Ministry said Ukrainian forces had unleashed an artillery barrage in the area and then sent a group of 60 scouts to try to take control of the nuclear power plant.

The head of the International Atomic Energy Agency said the IAEA’s mission in Ukraine was to try to avoid an accident at the Zaporizhzhia nuclear power plant.

He said Ukrainian troops arrived in boats, landing three kilometers northeast of the plant on the left bank of the Dnieper and attempted to seize it. The ministry said Russian forces “took steps to destroy the enemy”, engaging fighter jets.

“The Kyiv regime’s provocation is aimed at derailing the arrival of the IAEA group at the Zaporizhzhia nuclear power plant,” the ministry said in a statement.

The Russian administration in the town of Enerhodar, just outside the plant, said at least three local residents were killed and one injured early Thursday by Ukrainian shelling.

Ukrainian authorities have accused Russia of bombing Enerhodar and the territory of the nuclear power plant in a false flag attack intended to derail the arrival of the IAEA team.

“We demand that Russia cease its provocations and provide the IAEA with unhindered access to the Ukrainian nuclear facility,” Zaporizhzhia Governor Oleksandr Starukh said.

Neither side’s version of events could immediately be independently verified.

The fighting came as Ukraine struggled to start the new school year in the midst of a war. Just over half of the country’s schools are reopening face-to-face lessons despite the risks.