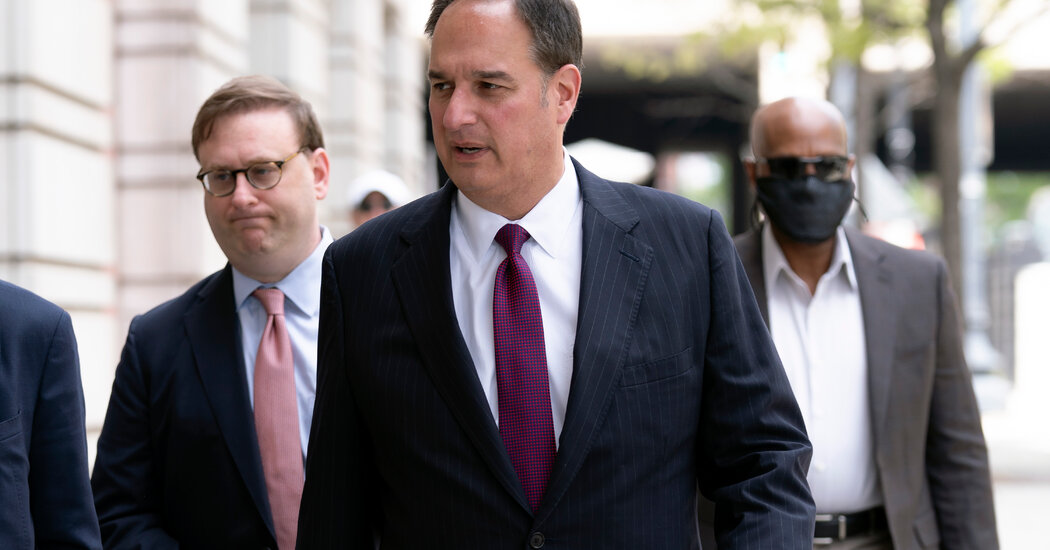 WASHINGTON — When the Trump administration assigned a prosecutor in 2019 to scour the Russia probe for any wrongdoing, President Donald J. Trump fueled expectations among his supporters that the probe would find a conspiracy “of Deep State” against him.

Three years later, the team led by Special Counsel John H. Durham will open the first trial on Monday in a case developed by their investigation, bringing before a jury the claims and counterclaims that surrounded the 2016 presidential campaign. But rather than showing FBI wrongdoing, it’s a case that paints the bureau as a victim.

The lawsuit centers on whether Michael Sussmann, a cybersecurity lawyer with ties to Democrats, lied to the FBI in September 2016 when he relayed suspicions about possible cyber connections between Mr. Trump and Russia. The FBI investigated the case, which involved a server at the Kremlin-linked Alfa Bank, and decided it was unfounded.

In preparation for the meeting, Mr. Sussmann had told an FBI official that he was not acting on behalf of any client. Prosecutors argue he concealed that a technology executive and Hillary Clinton’s campaign were his clients to make the allegations more believable.

The defense argues that Mr. Sussmann was not acting on their behalf at the meeting. The FBI was aware that he had represented the Democrats on matters relating to the Russian hacking of their servers, and subsequent communications made it clear that he also had a client who had been instrumental in developing the analysis of the data concerning Alfa Bank, according to its lawyers.

Although the charge against Mr. Sussmann is narrow, Mr. Durham used it to leak large amounts of information to insinuate that there was a vast conspiracy involving the Clinton campaign to essentially accuse Mr. Trump of collusion with Russia.

That insinuation also weighs on the other case that Mr Durham has developed, which is due to go to trial later this year. He accuses a researcher of the so-called Steele Dossier – a since-discredited compendium of opposition research into alleged links between Mr Trump and Russia – of lying to the FBI about some of his sources.

Both cases have links to the law firm Perkins Coie, where Mr Sussmann then worked. One of his partners, Marc Elias, was general counsel for the Clinton campaign and commissioned opposition research that led to the Steele dossier.

The Alfa Bank allegations and the Steele dossier were largely tangential to the official investigation into whether there was collusion between Russia and the Trump campaign. FBI officials had opened this investigation on other grounds, and the special counsel who completed the investigation, Robert S. Mueller III, relied on neither in his report. final.

(His report detailed “numerous ties between the Russian government and the Trump campaign,” but it did not accuse any Trump associates of criminal conspiracy with Russia.)

But Mr Trump’s supporters have rallied behind Mr Durham’s account, which resonates with Mr Trump’s oft-repeated assertion that the entire Russia investigation was a “hoax”.

Defense lawyers for Mr Sussmann also dismissed prosecutors’ broader insinuations about the constellation of events that led to his indictment, accusing the Durham team of fueling politicized conspiracy theories.

Through his court papers, Mr Durham and his team signaled that they suspected Alfa Bank’s data or analysis may have been tampered with, although they were unable to prove it.

But the judge barred Mr Durham from presenting any evidence or argument to that effect, saying that unless there was evidence that Mr Sussmann had reason to doubt the data when it was given to him disclosed, there should not be “a long and largely unnecessary mini-trial to determine the existence and scope of an unindicted conspiracy.

Alfa Bank’s problem dates back to the spring of 2016, when it emerged that Russia hacked the Democrats.

That summer, as suspicions grew over Mr. Trump’s relationship with Moscow, a group of data scientists identified strange Internet data that appeared to link the Trump Organization’s servers to Alfa Bank.

Together with Rodney Joffe, a technology manager and cybersecurity expert, they speculated that it could be a secret communication channel. Mr. Joffe, who was already a client of Mr. Sussmann, told him about the matter, and Mr. Sussmann relayed those suspicions to reporters and the FBI. He also told Mr. Elias about it, and Clinton campaign officials were apparently aware that he was trying to get reporters to write about it.

Seeking to meet with the FBI to share the material, Mr. Sussmann contacted James A. Baker, then the agency’s top lawyer. Mr. Sussmann said in a text that he was not bringing it on behalf of a client and that he was motivated by a desire to help the office. Mr. Baker is expected to be the main prosecution witness.

But Mr Durham’s team obtained billing records from the law firm showing that Mr Sussmann had spent time working on Alfa Bank’s suspicions of the Clinton campaign. The team argued that he lied because if the FBI knew about the political connection, the agents might have handled the case differently.

“The strategy, as the government will argue at trial, was to create stories on this issue, on the Alfa Bank problem,” Andrew DeFilippis, Mr Durham’s prosecutor, said at a recent hearing. “And second, it was for law enforcement to investigate; and perhaps thirdly, your honor, to get the press to report that law enforcement was investigating this.

At the same hearing, defense attorney Sean Berkowitz said he would not dispute that Mr. Sussmann represented the Clinton campaign in briefing reporters on the allegations. But he suggested the defense would argue that Mr. Sussmann did not believe he was bringing the case to the FBI “on behalf” of the campaign or Mr. Joffe.

Mr. Berkowitz noted that Mr. Sussmann had told Mr. Baker that he believed the New York Times was planning to publish an article about the Alfa Bank suspicions, which is why he was reaching out.

“We expect there to be testimonials from the campaign that while they were interested in reporting on this outing, going to the FBI is something that was inconsistent with what they would have wanted before ‘there’s no press,’ Mr Berkowitz said. . “And actually going to the FBI killed the news story, which was inconsistent with what the campaign would have wanted.”

Some details of this case remain unclear. Mr. Baker testified that the FBI tried to ask the Times to “slow down” publication. But reports indicate that the editors were not ready to publish this article, which was written by journalist Eric Lichtblau, although the newspaper published one mentioning Alfa Bank six weeks later.

Defense attorneys also argued that even if Mr. Sussmann had lied, it would have been irrelevant because the FBI would have investigated the allegations anyway. And they suggested that despite his initial statement, Mr. Sussmann was open about having a client in subsequent communications. Notes from a March 2017 FBI meeting with Mr. Baker show the bureau understood it had one at that time.

The defense also subpoenaed Mr. Lichtblau, who is no longer with The Times, to testify. A lawyer for Mr. Lichtblau asked the judge to limit the questioning to his discussions with Mr. Sussmann, avoiding other confidential sources and journalistic questions. Mr Durham’s team should oppose such coercion.