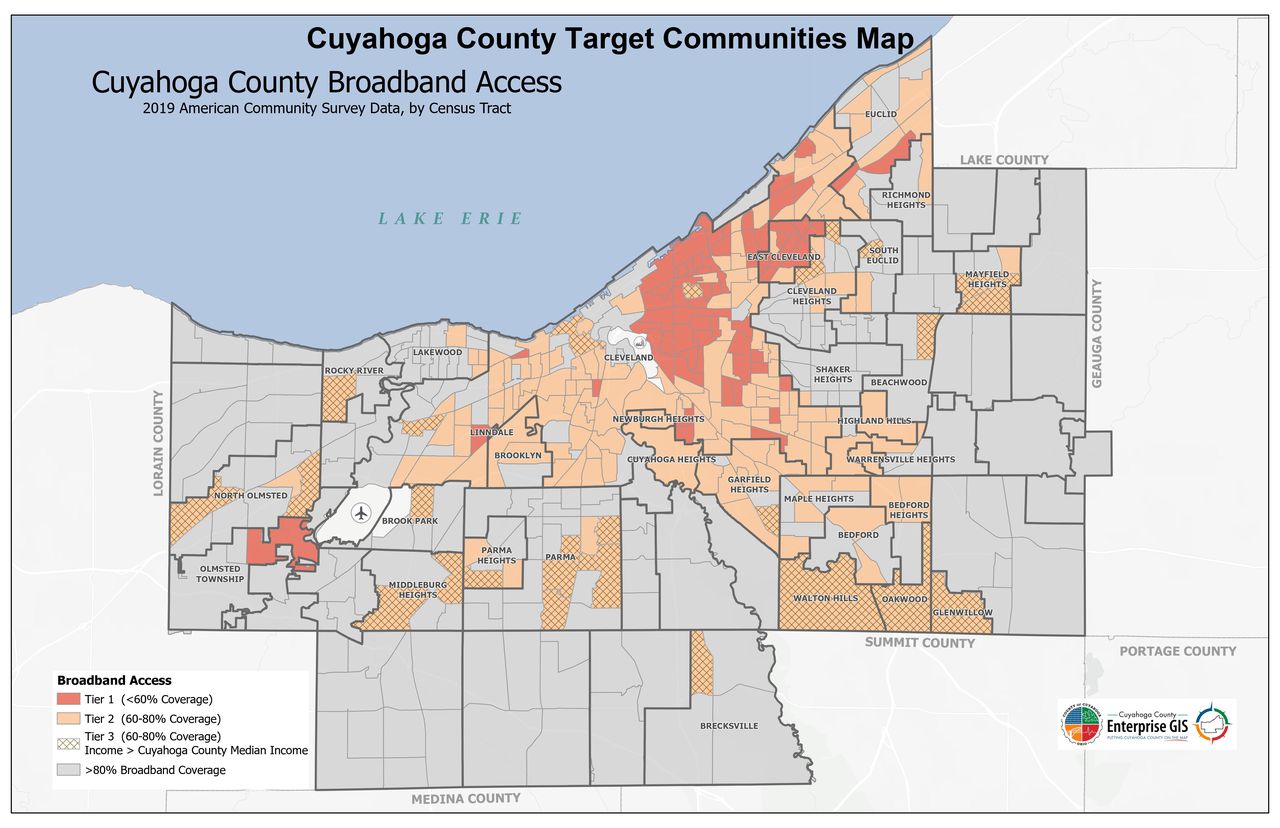 Thousands of Cuyahoga County residents may soon have access to high-speed internet, but some will likely see the improvements sooner than others.

Cuyahoga County will formally present the $19.4 million broadband expansion plan at a meeting on Tuesday, with the goal of adding high-speed Internet access in three phases.

PCs for People, which is about to perform the contract for the county, promises download and upload speeds of 100 Mbps for 25,000 homes, according to county documents. For comparison, Netflix recommends an internet connection of at least 15 Mbps to stream in 4K or Ultra HD, the highest definition video the company offers.

The second phase, which is expected to be completed in about 12 months, includes Euclid, Garfield Heights, Lakewood and Maple Heights, according to county documents.

A Friday press release from the county said the $19.4 million would come from the American Rescue Plan Act, often abbreviated ARPA, and provide broadband access to 85% of “unconnected” households.

Once installed, broadband established under this program will cost $15, unless the resident qualifies for the federal Affordable Connectivity Program, in which case the costs would be covered, according to a Friday news release.

Cuyahoga County chose PCs for People, a Minnesota-based nonprofit, after a bidding process that began in 2021 and elicited responses from 81 vendors. PCs for People received higher scores than its competitors, which included massive companies such as AT&T Services, Spectrum and T-Mobile, according to county documents.

The Cuyahoga County contract is a huge boon, financially, for PCs for People. In 2018, PCs for People had total revenue of $6.4 million, according to the latest tax records available. While the nonprofit has seen steady growth between 2014 and 2018, records show that the $12.4 million PCs for People will receive in the first year of the contract alone is a significant windfall for the company. ‘non-profit organisation.

PCs for People, which used to distribute computers to low-income families, gets its income from government subsidies, internet subscriptions, recycling old computer parts, computer repairs and more, according to their tax forms.

The push to boost wireless access follows the COVID-19 pandemic, which increased the need for quality internet access, and an analysis of census data which found Cleveland had the worst internet access. of all US cities with more than 100,000 households.

Cleveland and Cuyahoga County have taken their own steps to try to address the city’s relatively poor connectivity.

When Cleveland City Council Speaker Kevin Kelley announced plans to spend $20 million of his own ARPA money on broadband expansion in September 2021, he said the goal was to connect 40,000 households, partly using matching funds.

Kelly, who was running for mayor when the announcement was made, has been accused of rushing into a popular but half-baked scheme to gain political points.

Shortly before Kelly even presented this plan, however, Cuyahoga County was working on an adjacent program with another nonprofit, DigitalC, to provide Internet access to the central district of Cleveland. The DigitalC program is separate from the program configured to be managed by PCs for People.

The DigitalC program was both less expensive and smaller in scope than the program that PCs for People could oversee.

DigitalC had bid to work on the county’s $20 million ARPA-funded project and received a score of 70.6 out of 100, ranking #2 overall and just 0.1 points higher than AT&T. PCs for People received a rating of 84.5, surpassing DigitalC in all categories except “project management,” in which both groups received a rating of 4.2 out of 5, according to county documents.