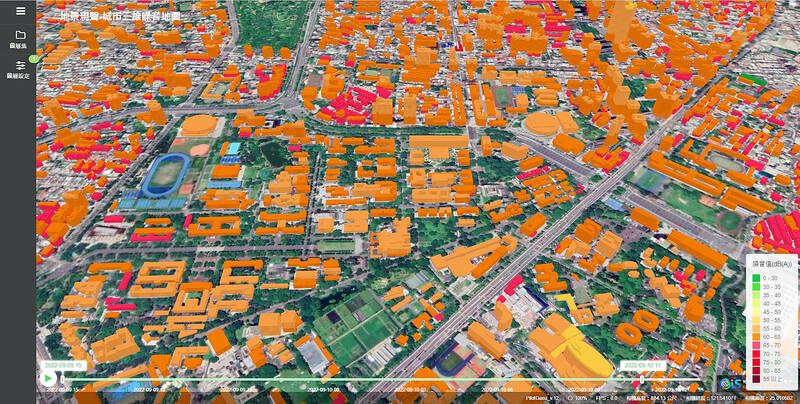 AFFECTING PEOPLE’S HEALTH:
Noise is the most frequently reported environmental hazard in the capital, said Chan Ta-chien, the researcher who led the project.

Three in 10 Taipei residents live in “noisy” areas by WHO standards, soundscape maps created by a research team from Academia Sinica showed.

Chan Ta-chien (詹大千), a researcher at the institution’s Humanities and Social Sciences Research Center, led his team to create two-dimensional and three-dimensional maps with environmental and weather data.

Noise has several effects on people, the Environmental Protection Administration said on its website, adding that noise levels of 50 to 70 decibels could cause mild discomfort in some people and long exposure. noise over 70 decibels can cause anxiety. associated symptoms.

The Daan (大安) and Zhongshan (中山) districts of Taipei are particularly noisy at night, while areas near Taipei International Airport (Songshan Airport) and its flight paths, such as part of Songshan District (松山) and the Taipei Flora Expo Park (台北花博公園), are noisy during the day, Chan said.

Using the platform provided by the National Center for High-performance Computing of the National Applied Research Laboratories, the team drew the soundscape maps for Taipei and Taichung based on statistical models.

Noise has been the most frequently reported environmental hazard in Taipei in recent years, Chan said.

Most residential buildings in Taiwan are near commercial buildings, so the allowable noise standard is lower than the WHO guidelines, he said.

Taiwan only conducts noise testing twice a season, so it’s unclear how many people are exposed to noise, he said.

The team developed a “sound box” equipped with digital sensors that can transfer real-time environmental sound data to researchers, he said.

The team is looking to link the boxes to air quality sensors, he added.

Data from traffic monitoring devices installed on more than 700 road sections in Taipei can detect the most severe sources of traffic noise through reverse calculation, he said.

Chan said the soundscape maps are updated hourly and can be viewed at This site.

Wu Chen-chi (吳振吉), a professor in the department of otolaryngology at National Taiwan University, said noise increases the risk of cardiovascular disease, hearing loss and dementia.

People exposed to long-term noise are at higher risk of depression, so those who are feeling unwell and suspect noise is the cause should see a doctor as soon as possible, he said.

Chan said people who live on the lower floors of buildings next to city streets should install soundproof doors and windows to reduce their exposure.

The WHO, in its environmental noise guidelines for the European region, stated that exposure to noise increases the risk of high blood pressure, sleep deprivation and mental stress.

Research published in the European Heart Journal showed that 6% of people living in an environment where the average sound level is above 50 decibels are at risk of developing high blood pressure.

Comments will be moderated. Keep comments relevant to the article. Remarks containing abusive and obscene language, personal attacks of any kind or promotion will be removed and the user banned. The final decision will be at the discretion of the Taipei Times.