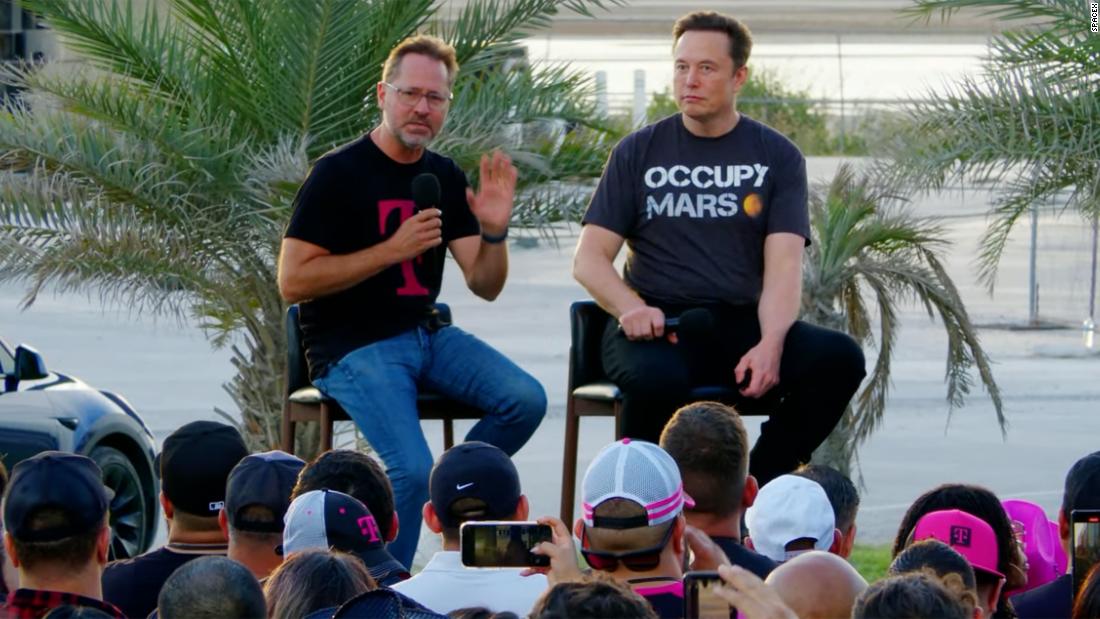 The idea, which the companies plan to roll out in beta testing by the end of next year, is to use SpaceX’s satellite internet business, Starlink, to provide an “extra layer” of connectivity to T-Mobile phones. T-Mobile is also offering reciprocal roaming to mobile carriers in other countries, hoping that Starlink’s global reach will allow people to use their phones to send messages around the world.

“This is an open invitation to carriers around the world, please contact us,” SpaceX CEO Elon Musk said at an event announcing the plan.

The new service will rely primarily on “version 2”, or V2, of the Starlink satellites, according to Musk. These aren’t expected to start launching until next year.

“To provide this service, the companies will create a new network, broadcast from Starlink’s satellites using T-Mobile’s nationwide midrange spectrum. This true satellite-to-cellular service will provide near-complete coverage almost anywhere a customer can see the sky,” according to a T-Mobile press release.

Cellular satellite service through Starlink will also work with phones on the market today, Musk said.

Essentially, the goal is to bring about the “end of mobile dead zones,” T-Mobile CEO Mike Sievert said at an event announcing the partnership at SpaceX’s South Texas facility. But it will only be available to people on T-Mobile plans, although Sievert said the “most popular plans at T-Mobile” will get the service at no additional cost. The companies said that at first the service will likely be limited to text messages, with video and voice calls occasionally coming through. The companies plan to upgrade the service later.

“You might have to wait a half hour, maybe, for the thing to go through, but it should still work from the start,” Musk added. “It’s not a substitute for ground cell stations, because ground cell stations, especially in urban and suburban areas, will definitely be superior to what we’re talking about here. It’s really meant to provide coverage of basis to areas that are currently completely dead.”

T-Mobile says it estimates “well over half a million square miles” of the United States are “unaffected by cellular signals,” according to a press release.

Musk touted it as a “lifesaving” mission, as it could provide people with connectivity in emergency situations, such as while hiking in remote areas.

It is well known that large swathes of the United States do not have access to the Internet or cell service. While cellular service relies on towers that broadcast connectivity in certain areas and traditional broadband connections require underground cable networks, SpaceX’s Starlink has taken a different approach to connectivity. Its services rely on hives of satellites a few hundred kilometers above the Earth that work in tandem with beam connectivity.

It remains to be seen how effective the partnership will be and how many wireless customers will benefit. Starlink is also still a new service with only around half a million users so far.

The news comes just two weeks after federal regulators announced that SpaceX would not receive the nearly $900 million in grants awarded to the company in December, citing the fact that its satellite service is “still in development.” its technology” and that the company “has failed to demonstrate that [it] could provide the promised service.”

The Federal Communications Commission, which oversaw the grant program, said there were several reasons it decided to deny SpaceX grants, including this recent data which “indicates that Starlink speeds have decreased from the last quarter of 2021 to the second quarter of 2022”.