Ranking of UEL clubs and groups with the Elo system 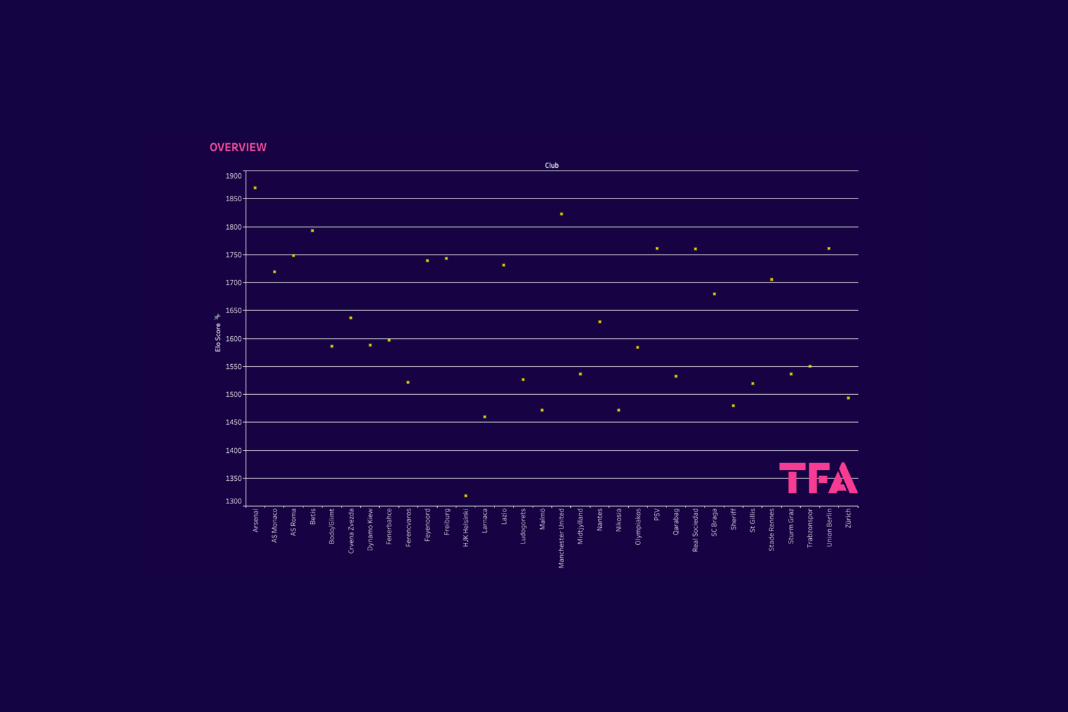 The 2022/23 UEFA Europa League is set to be the 52nd edition of the second most important competition for European football clubs, known as the UEFA Cup until the 2008/09 season. The final will be played at the Puskás Aréna in Budapest, Hungary. Budapest was originally scheduled to host the 2021/22 UEFA Europa League final.

The winner of the Europa League gets a place in the next UEFA Champions League and participates in the UEFA Super Cup. Participants from Russia are excluded for the 2022/23 campaign. The Spanish team Sevilla won the competition record. Last season, Eintracht Frankfurt won the cup.

In this data analysislet’s watch this UEFA Europa League campaign based on the Elo system. Moreover, in this analysis, we will discover data and statistics of all competitors.

Elo estimates the strength of a club based on results against opponents and their strength. The Elo system works with a single number, the Elo value. The difference in Elo points between two teams translates directly into a probability of winning against that team.

The influence of each game decreases as new games are played. In this way, a club’s Elo rating is a combination of all its previous results, with games from the distant past having only a microscopic influence and more recent games influencing the rating the most.

To conclude, Elo ratings put a club’s results into perspective. Leagues vary greatly in quality and a metric that takes into account the strength of the opposition is essential for comparing clubs between leagues.

Therefore, the probability of winning the trophy for Arsenal is the highest, according to the Elo rating. However, the course of the knockout stage with possible opponents is not taken into account. 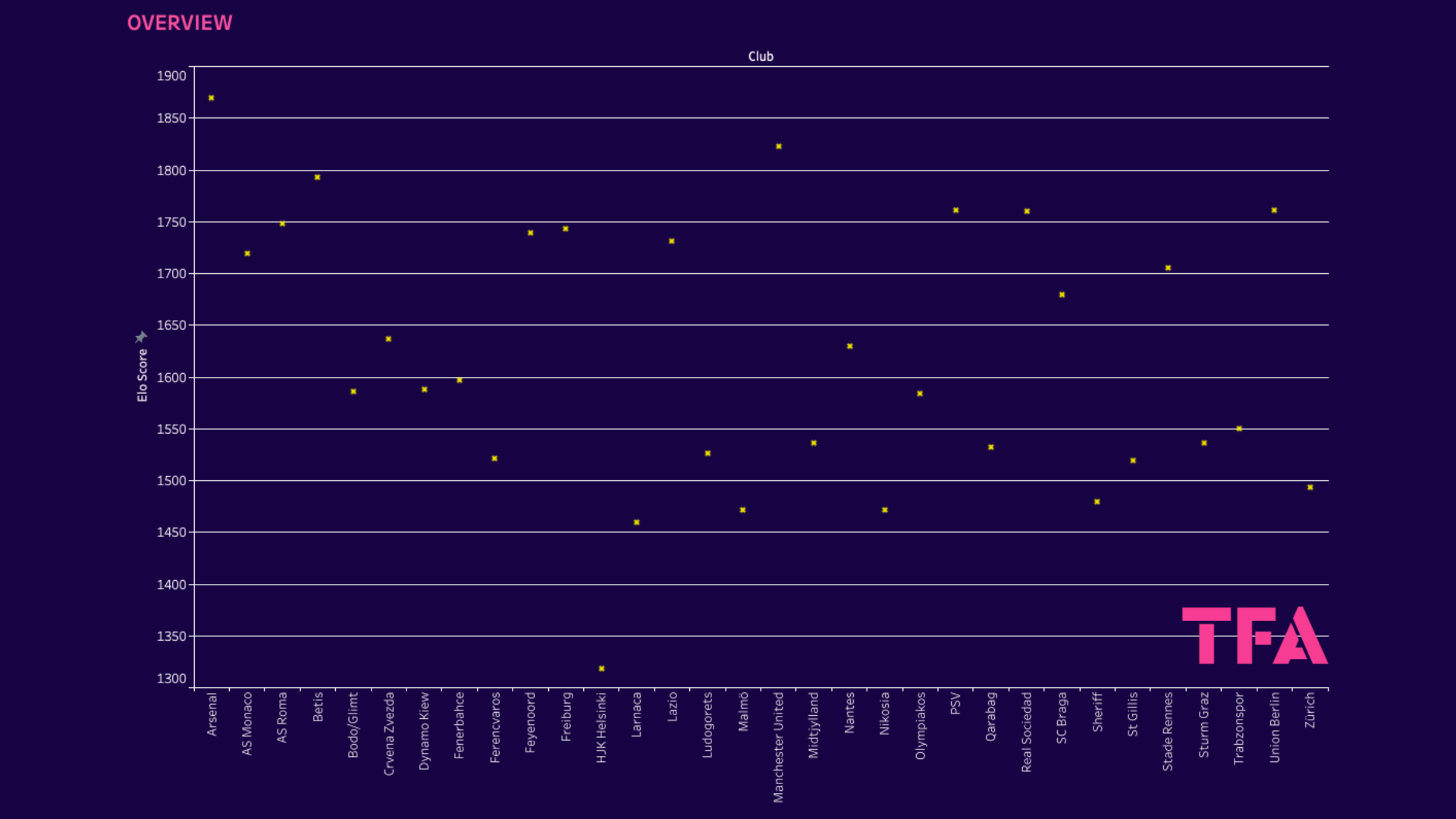 In Group A, the participants are Arsenal (England), PSV Eindhoven (Netherlands), Bodo/Glimt (Norway) and Zürich (Switzerland). According to the Elo ranking, Arsenal (1,896) are the big favorites in Group A. They are followed by PSV Eindhoven (1,761). Therefore, two of the top five contenders in this year’s campaign will already face off in the group stage.

Bodo/Glimt (1,586) is likely to finish the group stage in third place. Zürich (1,493) are the biggest underdogs in this group. 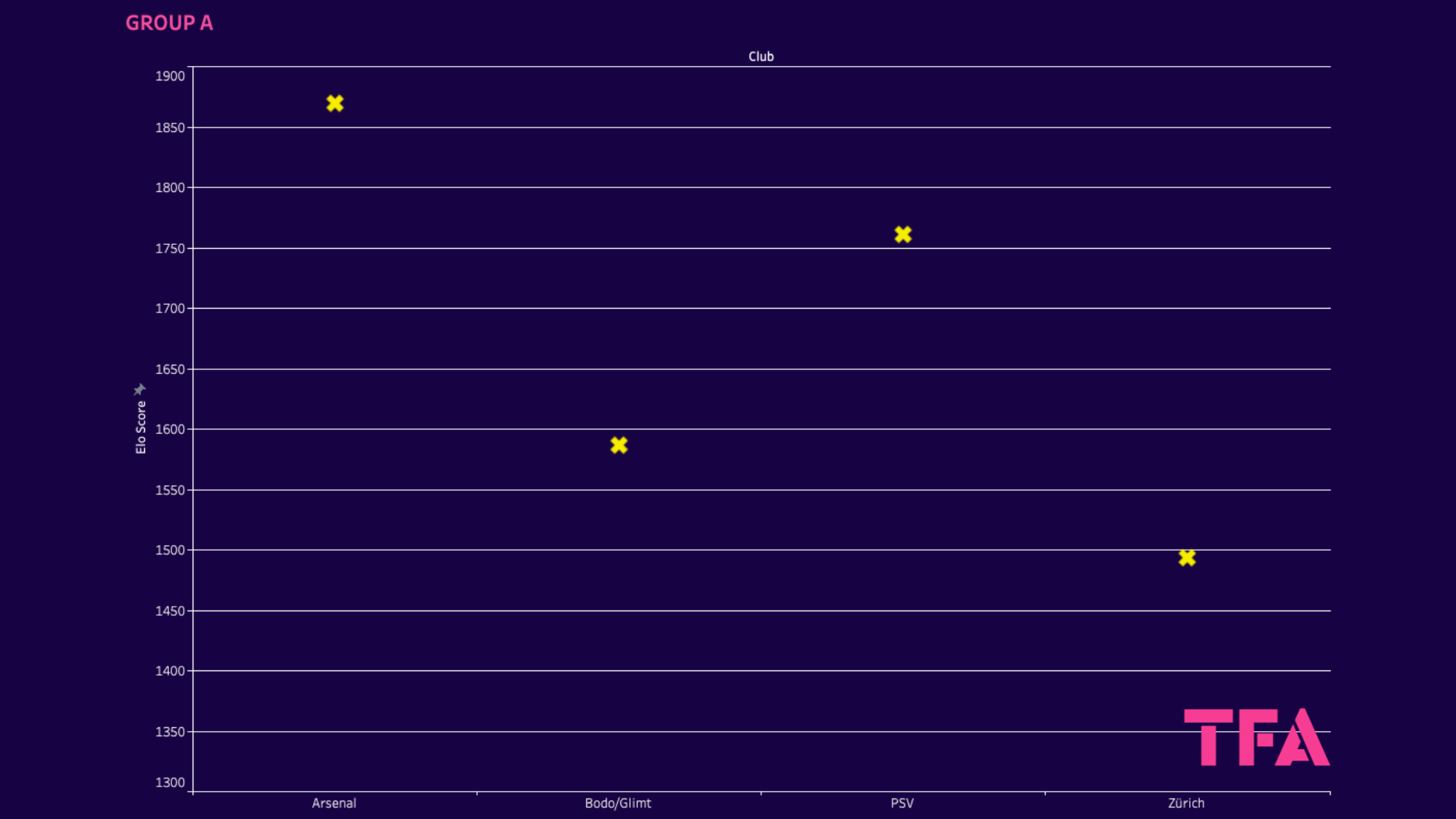 In Group B, the participants are Dynamo Kiew (Ukraine), Stade Rennes (France), Fenerbahce (Turkey) and AEK Larnaca (Cyprus). According to the Elo ranking, Stade Rennes (1,705) are big favorites in Group B. They are followed by Fenerbahce (1,597).

Dynamo Kyiv (1,588) is likely to finish the group stage in third place. Larnaca (1,459) are the biggest underdogs in this group. 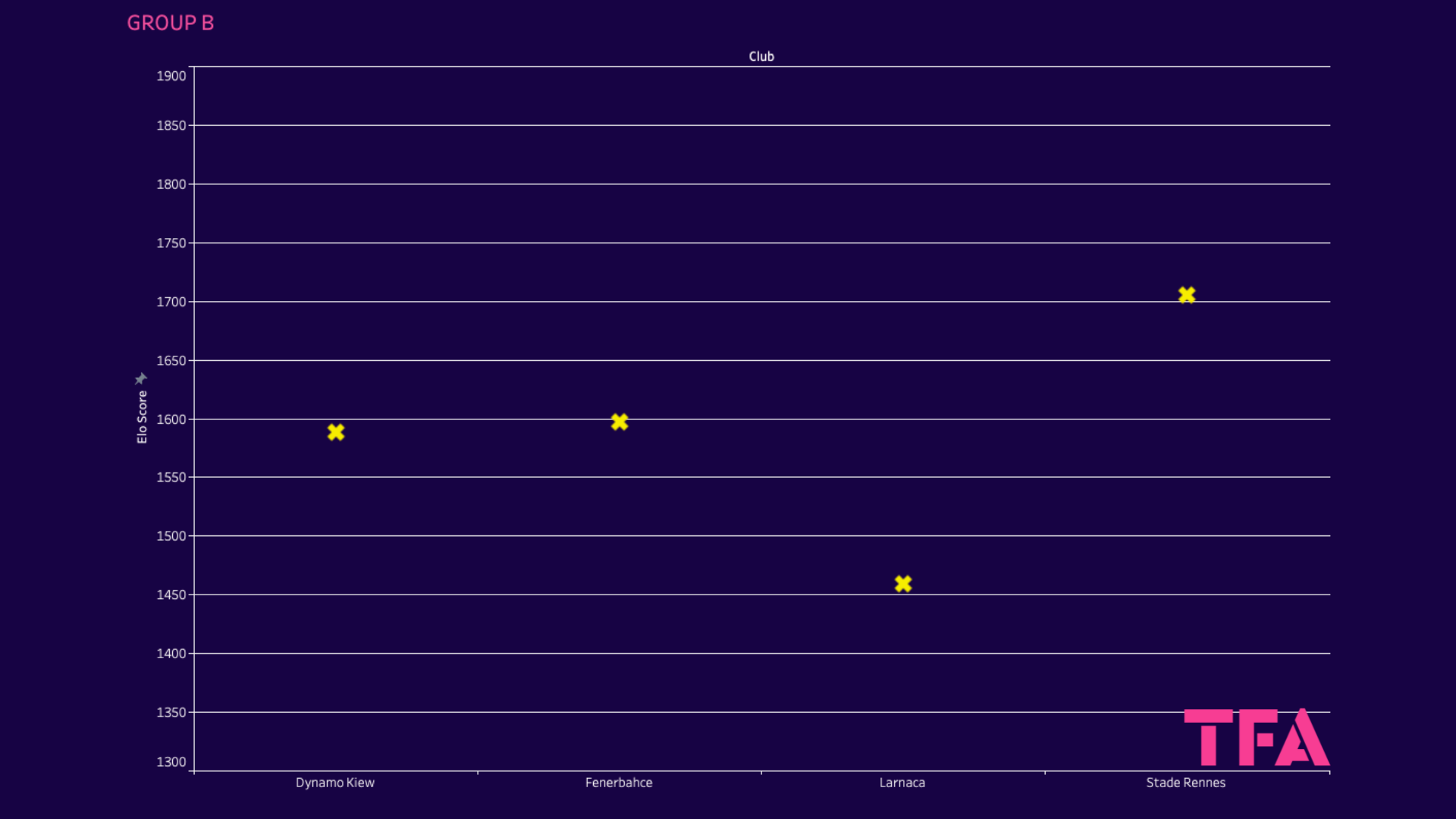 In Group C, the participants are AS Roma (Italy), Ludogorets (Bulgaria), Real Betis (Spain) and HJK Helsinki (Finland). According to the Elo rankings, Real Betis (1,793) are the big favorites in Group C. They are followed by AS Roma (1,748). Ludogorets (1,526) are expected to finish the group stage in third place. HJK Helsinki (1,471) are the biggest underdogs in this group. 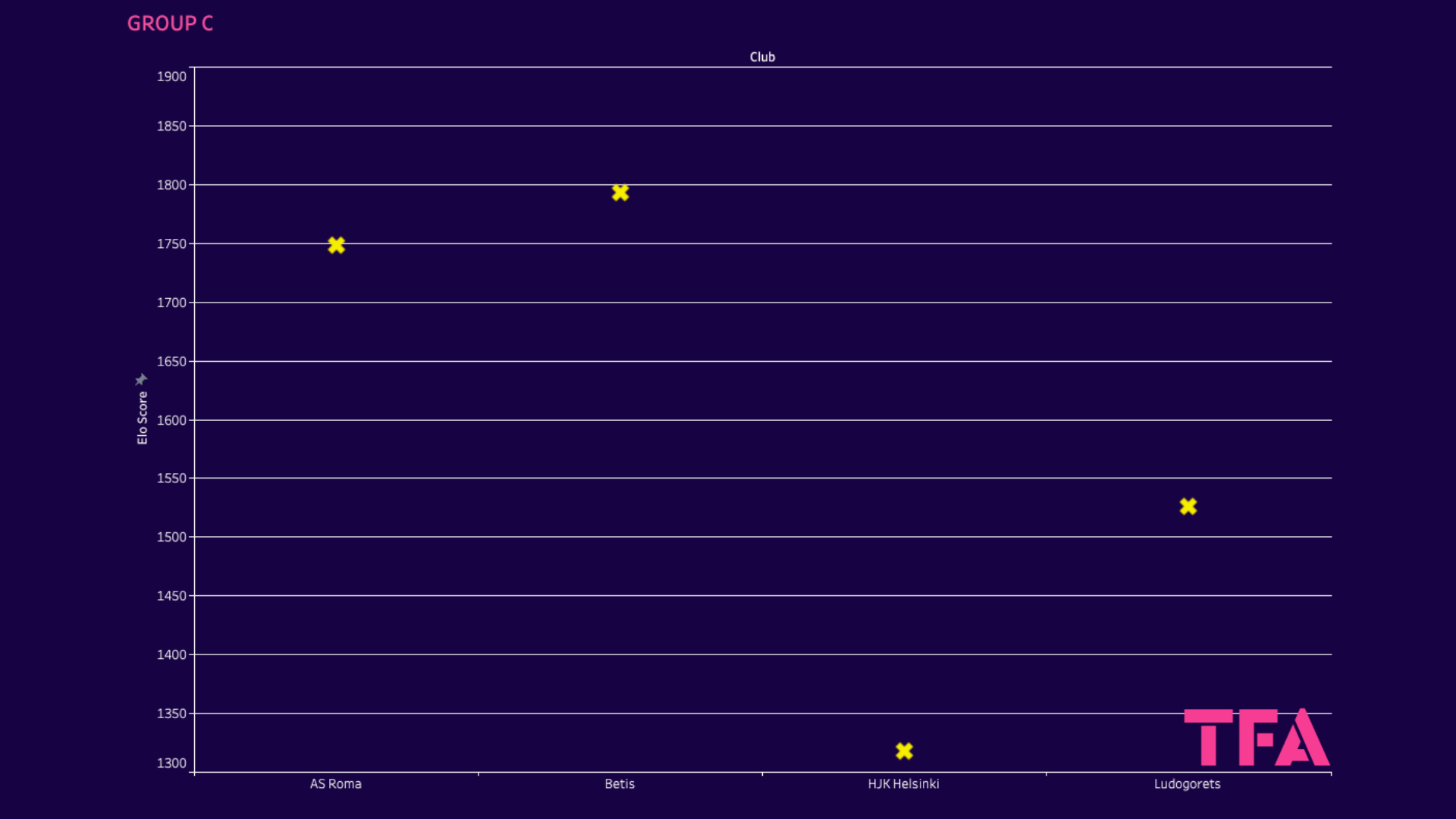 In Group D, the participants are SC Braga (Portugal), Malmö (Sweden), Union Berlin (Germany) and Union St. Gilles (Belgium). According to Elo ratings, Union Berlin (1,761) are the big favorites in Group D. They are followed by SC Braga (1,679). Saint-Gilloise (1,519) are expected to finish the group stage in third place. Malmo (1,471) are the outsiders of this group. 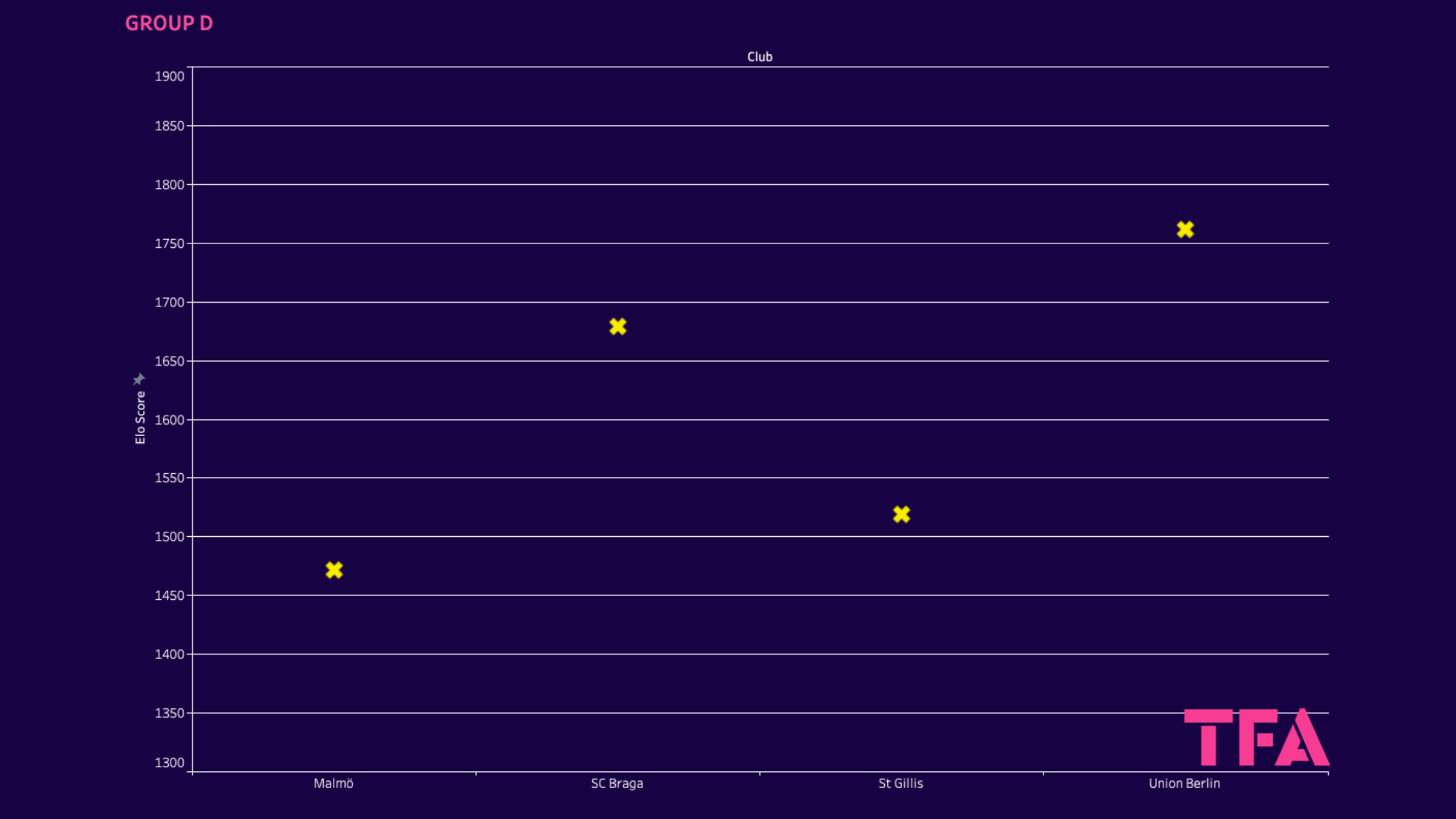 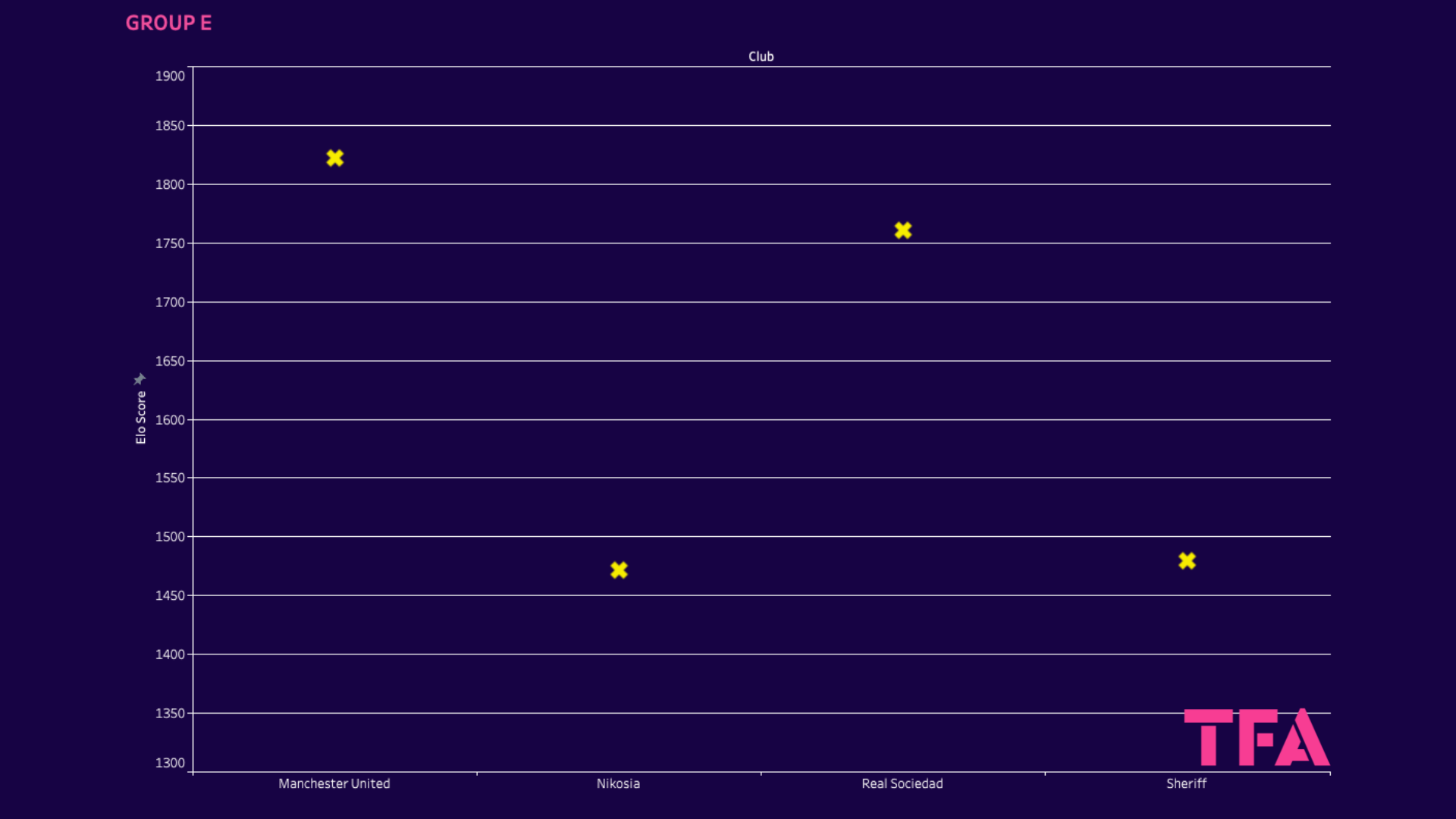 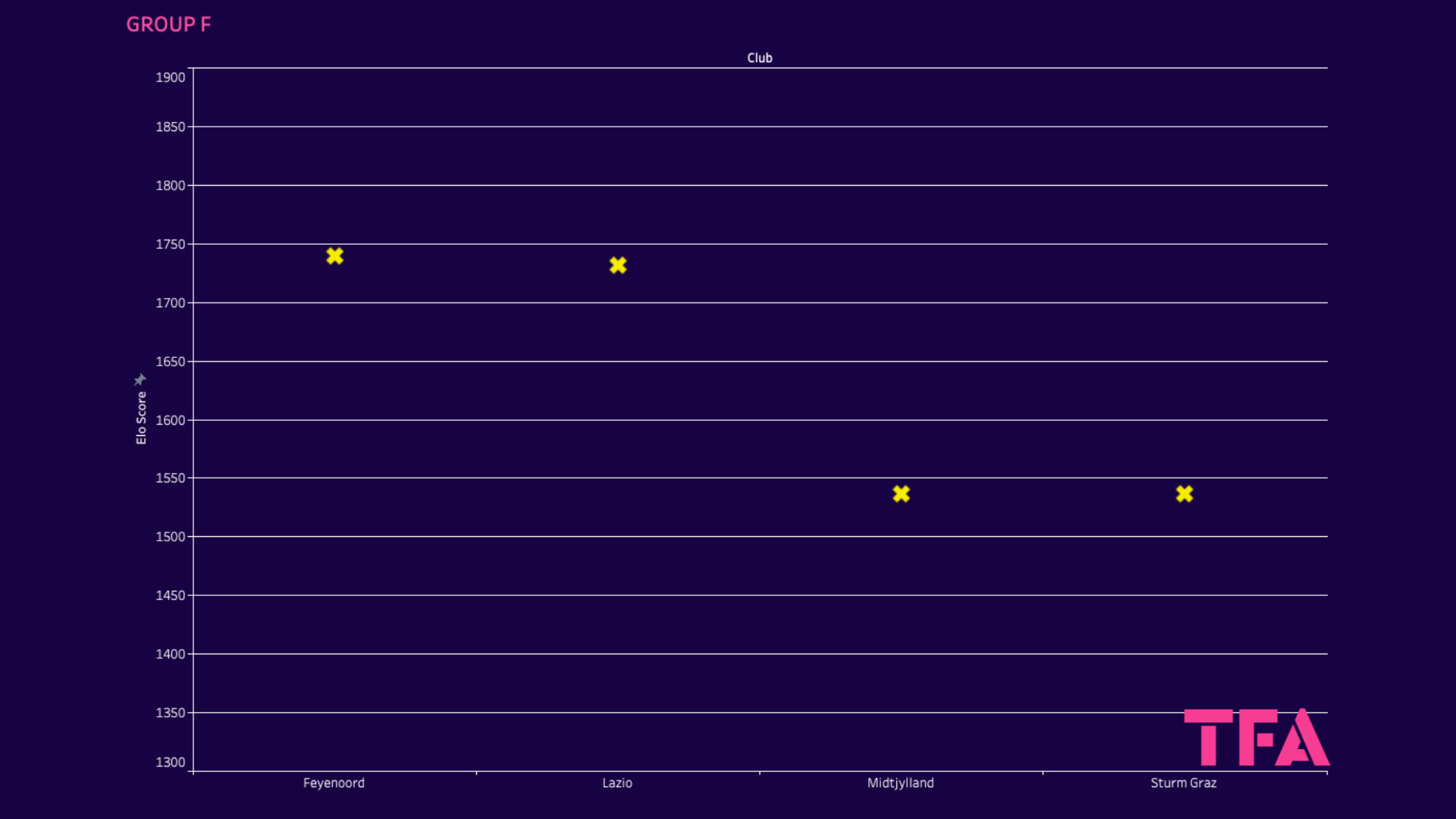 In group G, the participants are Olympiacos (Greece), Qarabag (Azerbaijan), SC Freiburg (Germany) and Nantes (France). According to Elo ratings, SC Freiburg (1,743) are the big favorites in Group G. They are followed by Nantes (1,629). Olympiacos (1,584) are expected to finish the group stage in third place. Qarabag (1,532) are the biggest underdogs in this group. 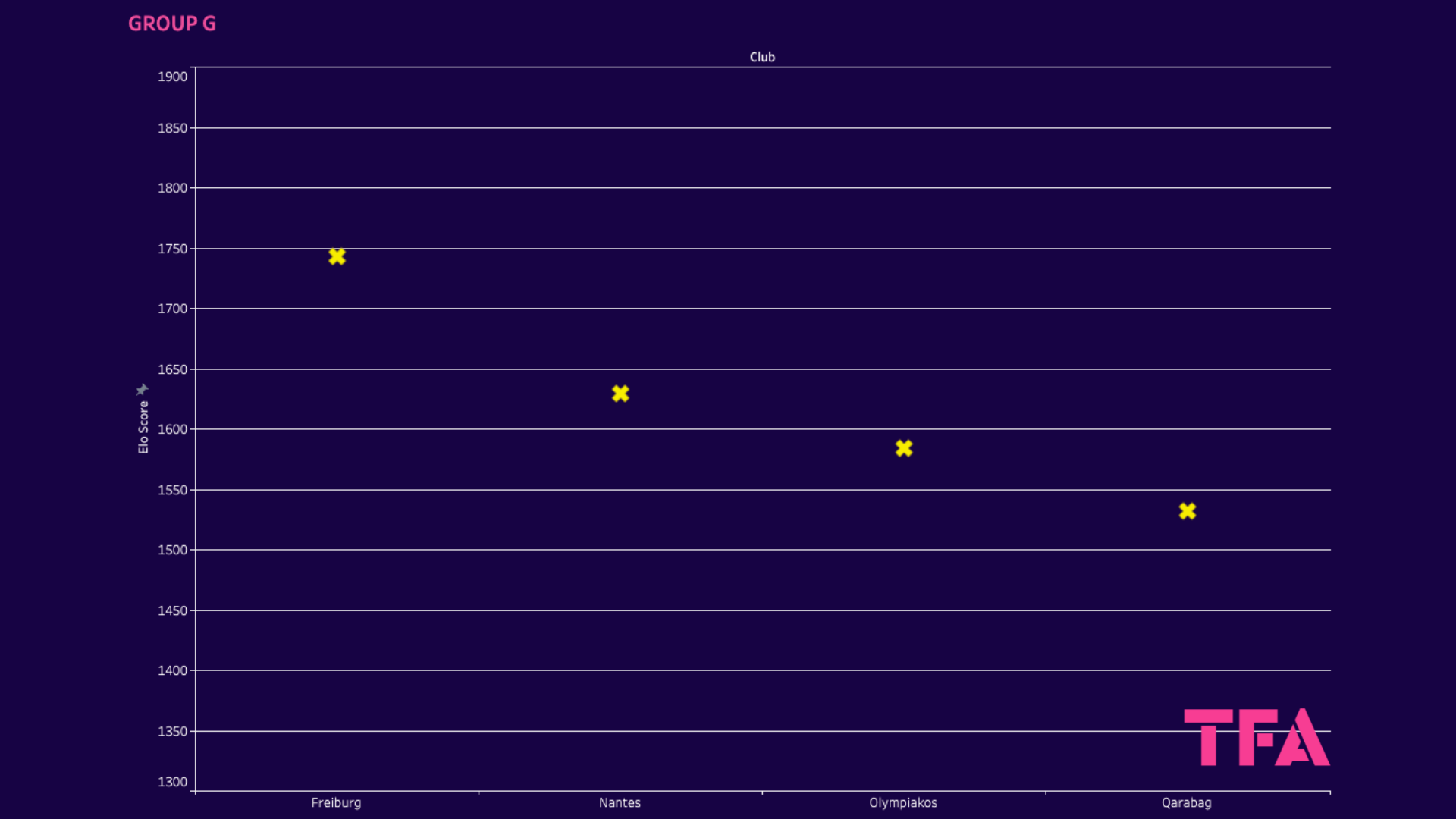 In Group H, the participants are Belgrad (Serbia), AS Monaco (France), Ferencváros (Hungary) and Trabzonspor (Turkey). According to the Elo ranking, AS Monaco (1,719) are the big favorites in Group H. They are followed by Belgrade (1,636). Trabzonspor (1,550) are expected to finish the group stage in third place. Ferencvaros (1,521) are the biggest underdogs in this group. 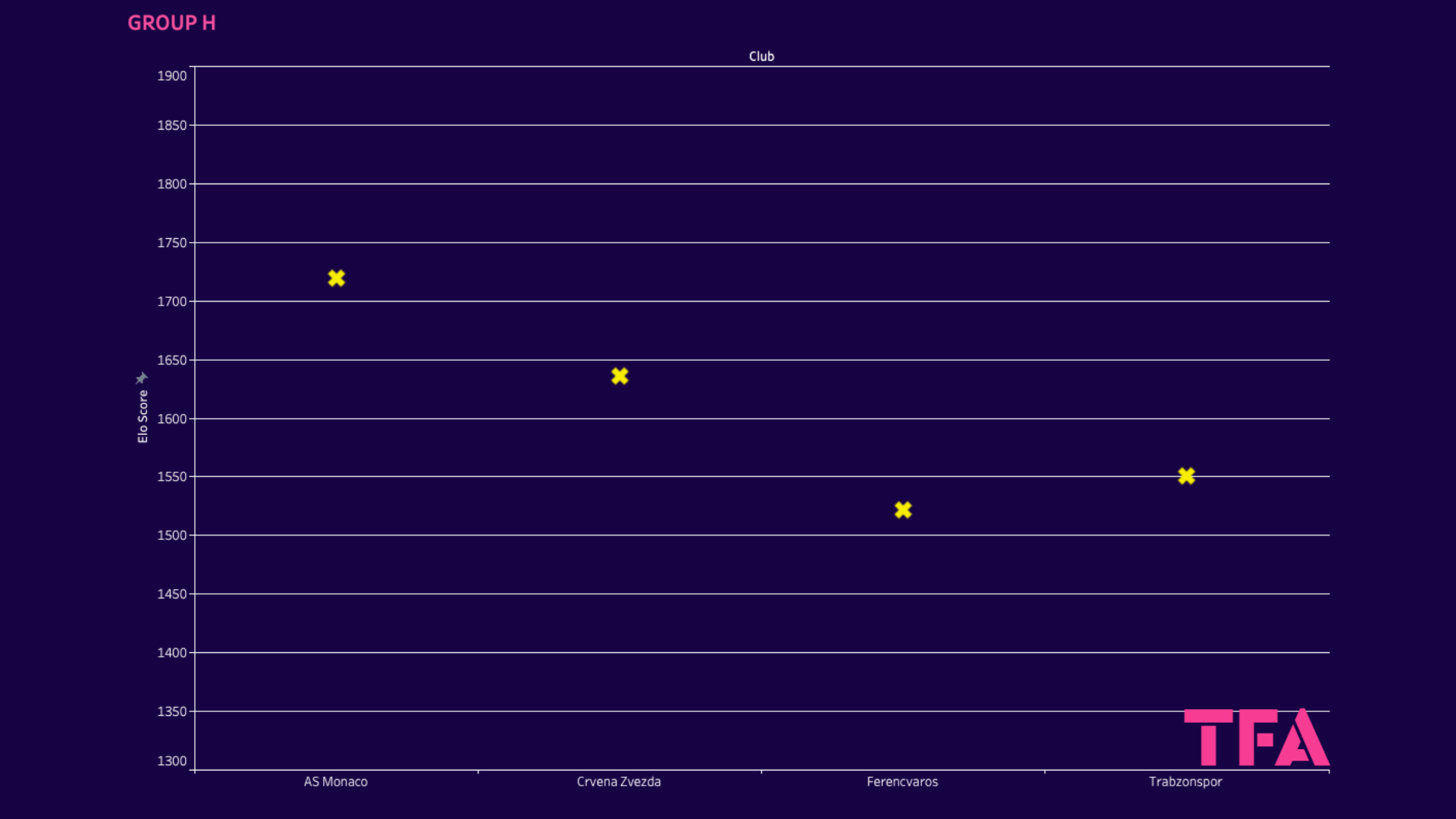 Premier League clubs Arsenal and Manchester United are the biggest favorites to lift the trophy this season, while HJK Helsinki are the biggest underdogs. The best group is probably Group A with players like Arsenal and PSV Eindhoven. The second best group could be Group E with Manchester United and Real Sociedad. The weakest groups are arguably groups B and H, but overall the competition is filled with star quality more than ever before.

20-year-old analyst from Germany. I am currently studying football management as I aspire to work in elite football.