New York’s response to violent incidents will include reinstating a unit of plainclothes officers, mayor says 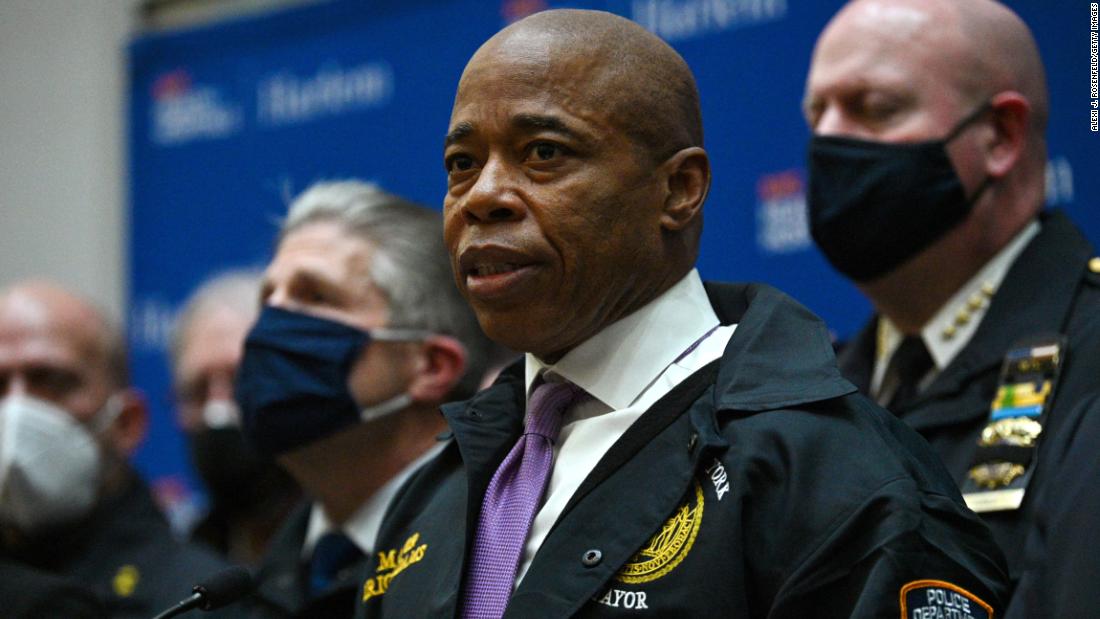 The city will ‘immediately’ reinstate a ‘newer version of the modified plainclothes anti-weapons unit,’ Adams told CNN’s Dana Bash on ‘State of the Union,’ a step he had called for during his campaign.

Undercover police units have been criticized by some as an outdated policing practice, and the New York Police Department had reassigned many such officers in 2020. However, Adams, who took office during the new year, said his team “did the right analysis and now we’re going to roll that out.”
They are the fourth and fifth NYPD officers to be shot since the start of the year, although NYPD officers were not the only victims of gun violence: an 11-month-old girl was shot in the face, caught in the crossfire in the Bronx. Wednesday’s shooting left her in critical condition.
Adams did not give details on the plainclothes units or how they will operate, but said his administration will present a plan to New Yorkers this week. Speaking to CNN last month, new NYPD commissioner Keechant Sewell said such a unit would focus primarily on gun crimes.

Sewell asked precinct commanders to select candidates for the modified plainclothes anti-weapons unit, according to a city official. The unit’s goal would be to get illegal guns off the streets, and those selected would have to undergo specific training, the official said on Sunday.

The broader plan rolling out in the coming week will address the “underlying reasons why you see crime in our city,” Adams told CNN; among them, the flow of firearms into city authorities has come to light since Friday’s shooting. Authorities say the weapon used by the suspect – who was shot by a third NYPD officer as he tried to flee and remains in critical condition – was a Glock 45 stolen in Baltimore in 2017.

“We have to stop the flow of weapons,” the mayor said. “We’re taking thousands of guns off our streets, and it seems like for every gun we take off the streets, five arrive. That’s unacceptable.”

The crime rate has been on the rise in recent months, although not nearly where it was in the early 1990s. In November, the most recent month for which the city released data, the crime rate rose by 21.3% compared to the same period last year, according to the NYPD.

Along with reintroducing plainclothes police units, Adams said the city will pair mental health professionals with police personnel to respond to incidents on the subway.

Adams’ announcement comes just over a week after Michelle Alyssa Go, 40, died after being pushed onto the tracks of an incoming train at the Times Square-42nd Street subway station in what Commissioner Sewell called it an “unprovoked” incident.

Police and mental health professionals will work as a team, Adams said, to “eliminate the disorder that is clearly in our city’s subway system.” Together, these teams will be “more proactive and not just reactive”, added the mayor.

“We shouldn’t wait for someone to take a dangerous action when we know they’re on the station in the first place,” he said. “Immediately, when you see a dangerous person there, mental health professionals will be deployed and that person will receive appropriate care and be removed from our subway system.”

CNN’s Mark Morales and Shimon Prokupecz contributed to this report.