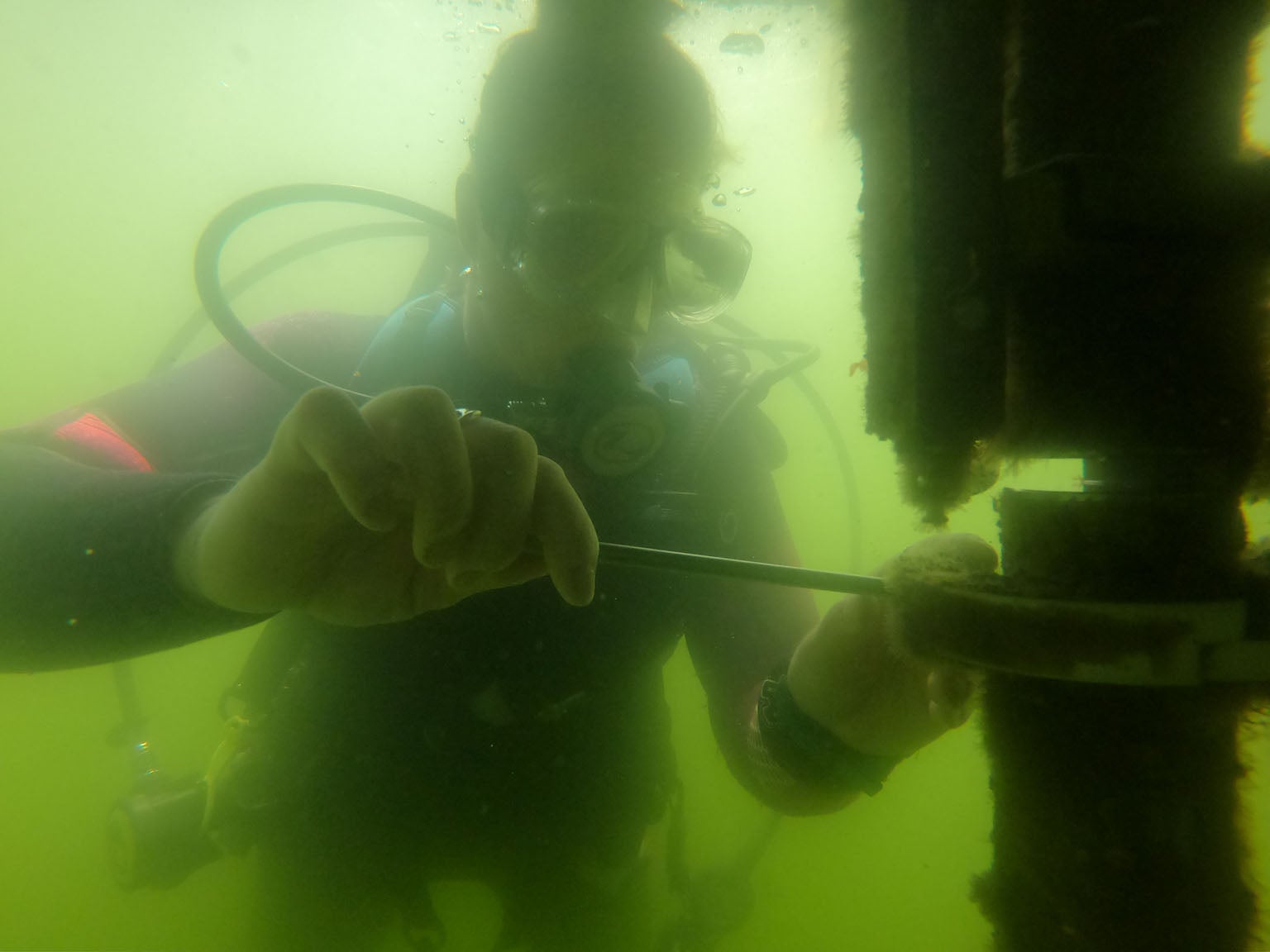 KINGSTON, RI – November 3, 2022 – Undergraduate students from Rhode Island colleges and universities traveled to the University of Rhode Island this past summer, using EPSCoR (Program established to stimulate competitive research) funds to study multiple aspects of Narragansett Bay, from drones to seawater nutrients; students from the Rhode Island School of Design even explored how to communicate scientific research using visuals and design.

The University’s EPSCoR program annually invites Rhode Island undergraduate students to join in this research. Students in the program benefit from a 10-week introductory research experience, helping them to make informed decisions about the direction of their education and career. EPSCoR provides federal and state funding, helps generate research infrastructure, and trains the next generation of scientists under the RI C-AIM (RI Consortium for Coastal Ecology Assessment Innovation & Modeling), EPSCoR’s current grant led by URI. Now in its fifth year, the program has brought $57.7 million to the state, with research focusing on Narragansett Bay and the impacts of climate change on coastal ecosystems.

Over the years, a number of undergraduate students have had the chance to contribute to research through the EPSCoR program. Mason Jacob ’24, an aspiring multidisciplinary engineer, is one and shared more about what an EPSCoR research experience is. “I gained important knowledge about research as a whole,” he said, “I made valuable personal connections and improved my ability to communicate my work.”

Jacob has contributed to efforts to better understand the ecosystem dynamics that contribute to the growth of harmful algal blooms that disrupt the shellfish industry and coastal communities. Shellfish in the bay are worried for good reason: blooms produce dangerous neurotoxins that can accumulate in shell tissue.

A graduate in electrical engineering, Jacob was able to broaden his skill base by taking on challenges in mechanical engineering and computer science. His work has focused on the physical structure of buoy platforms that send data to the Narragansett Bay campus for analysis. The buoys – currently deployed off Jamestown and in Greenwich Bay – collect high-resolution data to inform predictive algorithms that can predict the likelihood of a bloom event based on real-time conditions in the bay.

The URI engineering major had to completely redesign the sensor clamps to improve data collection, which in turn will enable better data management decisions and hopefully mitigate economic impact and risks to human health.

Jacob created and manufactured two types of clamps to fit four different sensors, using CAD software and 3D printing, all complete redesigns of the clamps previously in place. Now, oceanographic sensors are better attached to buoys and eliminate the need for tools when divers maintain the sensors. Instead of juggling a 6mm bolt and hex wrench while staying afloat in the shifting ocean, divers can now simply unlatch the latch and unscrew the knob. More secure clamps also put an end to data transmission failures.

“I learned that research was more like engineering than I first thought,” Jacob said. “‘Problem solving’ is the common denominator. He is happy that his expertise can contribute to the Bay Observatory project, solving problems that were hampering the team’s ability to collect the data needed for the bay and for human health.

Jacob was mentored by an RI C-AIM postdoctoral fellow Kristofer Gomes and said he gained a better understanding of what it means to be a successful researcher. “The skills I learned will benefit my development on all fronts – personal, educational and professional,” he said. “I learned a lot from this and would encourage other interested students to apply.”

Join other student researchers for their presentations was a highlight, Jacob said, noting how good it was to do “academic research with real, local impact” alongside peers across the state.

Work conducted at URI via EPSCoR has revealed new insights into Narragansett Bay and brought the University closer to predictive models to anticipate changes in the berry at all levels, from nanoscale nutrients to fruits of sea ​​we eat in local restaurants.

Researchers here are also celebrating the results of EPSCoR’s promising research on the bay. EPSCoR is supported by a $19 million grant from the National Science Foundation, matched by the state, and brings together engineers, scientists, designers, communicators, and undergraduate students from colleges across the state, positioning Rhode Island as a “center of excellence” for research on Narragansett Bay and beyond. Since the program’s inception in 2017, 169 undergraduates like Jacob have received hands-on research training through the EPSCoR network.

“Our Bay Observatory has expanded our ability to observe the effects of climate change on coastal ecosystems, enabled the development of new sensors, and provided new opportunities to educate students and engage stakeholders,” Bothun said. “Most significant is the impact we’ve had on the next generation STEAM workforce, with more than 300 students and postdocs poised to contribute to the scientific and economic goals of our state and nation.”

URI, on behalf of the state, has submitted another proposal to continue to support advanced workforce research and development activities in Rhode Island; the next focus of EPSCoR funding will be research that examines marine plastic pollution and innovative ways to mitigate or prevent impacts.

Applications for undergraduate scholars will open in December. The program is open to all Rhode Island students and all majors are encouraged to apply. Learn more.