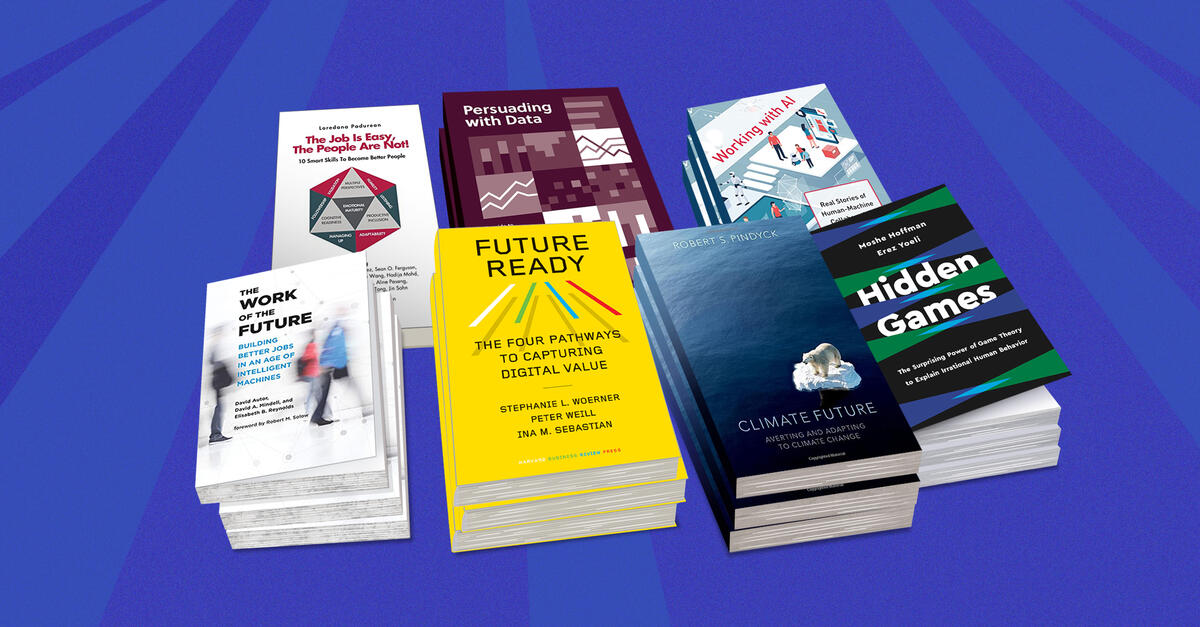 As the world moved through another year of the pandemic era, leaders and managers faced economic and geopolitical turmoil, workers reassessed their jobs and priorities, and everyone witnessed the environmental consequences of the global temperature rise.

Here are seven books from MIT Sloan faculty and experts to make sense of the past year and prepare for the future.

In the 1980s, three things happened: a deep recession hit the manufacturing sector, triggering rising imports; the Reagan administration and many employers took steps that weakened unions; and the tech industry has entered an era of meteoric growth. The result has been a widening gap between productivity and wages, and workers have not benefited from the boom in technological innovation.

Based on research from MIT’s Future Work Task Force, this book proposes that digital innovation need not be the enemy of human labor, as long as better jobs are created to match technological change.

By examining 29 examples of humans working with AI-enabled systems, this book shows when and how artificial intelligence works best and how companies can use AI responsibly.

The common theme is that AI augments the work that humans do, without fully automating it. That means many jobs are secure, Davenport said during a recent webinar hosted by MIT Sloan Management Review.

The two researchers explore the less obvious ways in which game theory explains human behavior, from the ways athletes and scientists develop and pursue passions to the reasons why people enjoy certain works of art, eat certain foods or donate to GoFundMe campaigns instead of high-impact charities.

Yoeli and Hoffman argue that people are bad at optimizing when they rely on their conscious mind to do so. But when people subconsciously rely on learned likes and beliefs, they behave more optimally. The authors apply their argument, with mathematical models, to explain everything from why people like expensive watches to the male/female ratio in animals.

In Kazakoff’s educational guide, he offers a toolkit for creating and designing effective graphics, and also “how to use visuals to create effective communications that convince an audience to accept and act on the data. »

Kazakoff draws on real-world examples as well as academic insights to teach readers how to design data visualizations, organize ideas in a presentation, and deliver that data to an audience.

“Readers will learn how to simplify to amplify, how to communicate data analysis, how to prepare for public resistance, and much more,” according to a summary.

After 50 years of categorizing qualities like a problem solver, a good communicator and a good listener as “soft,” it’s time for a change, according to Padurean.

“Pitching and presenting projects is not a tender act. Dealing with and providing critical feedback is not sweet, and dealing with office politics is certainly not for the weak. So why do we still call them soft? ” she writes.

In her book, Padurean outlines 10 “smart” skills to help managers navigate what she says is the one variable that always creates complexity: people.

In his book, Pindyck argues that relying on best-in-class emissions is not an effective policy. It posits that global warming could persist despite mitigation efforts. Even if the United States and Europe – which currently account for 30% of global carbon dioxide emissions – were to cut their emissions to zero next week (an unlikely scenario), that would still leave 70% of emissions unaccounted for.

Instead, the book offers actionable solutions for adaptation, such as geoengineering and the development of new hybrid crops.

“Reducing emissions is not enough; to guard against catastrophic climate change, we must invest in adaptation now,” he writes.

Scientists at the MIT Center for Information Systems Research found that companies that have implemented digital transformation have significantly better financial performance, with average revenue growth of 17.3 percentage points and net margins of 14.0 percentage points above industry averages.

Yet a study of 1,311 global companies found that only 22% are what CISR researchers call “future-ready”, that is, they have gone through a business transformation that allows them leverage digital capabilities to innovate, engage and delight customers while reducing costs. This new book offers advice for leaders whose companies have not yet reached this state.