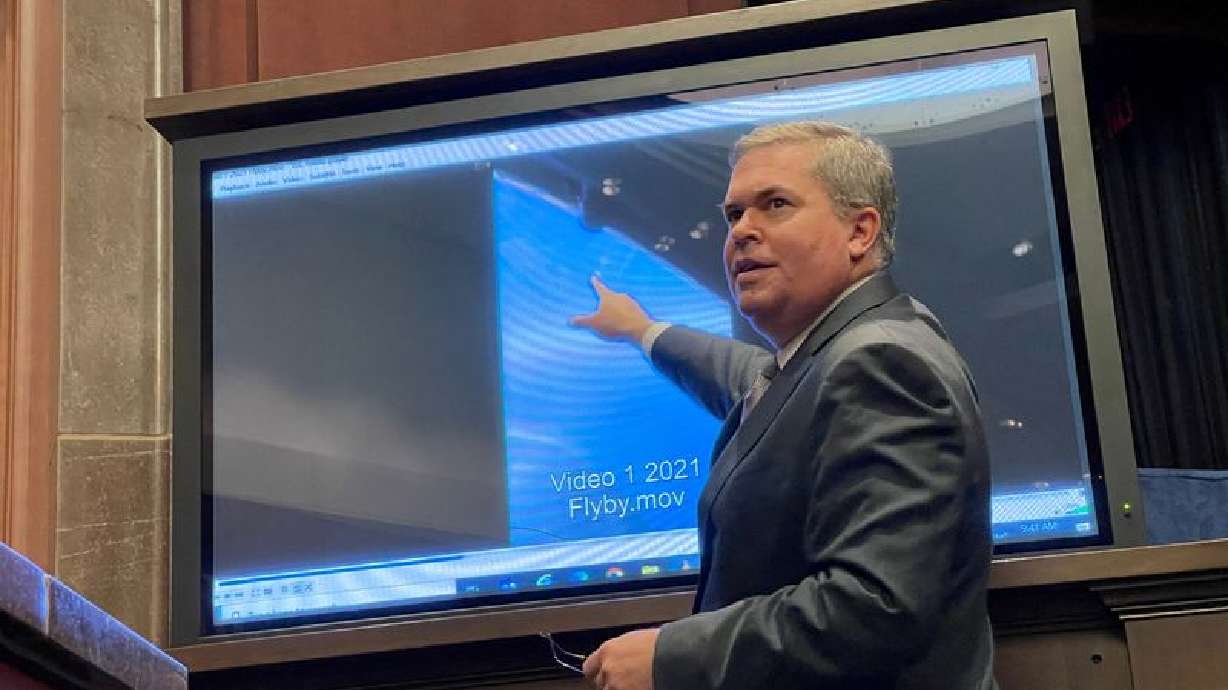 US Deputy Director of Naval Intelligence Scott Bray shows video of a ‘flyover’ as he testifies before a House Counterterrorism, Counterintelligence and Counterproliferation Intelligence Subcommittee on “Unidentified Aerial Phenomena”, during the first congressional public hearing on “UFOs” in more than half a century, on Capitol Hill in Washington, United States, May 17. (Joey Roulette, Reuters)

WASHINGTON — A declassified version of the latest U.S. defense intelligence report on UFOs — renamed in official government parlance “unidentified aerial phenomena” — is expected to be released in the coming days.

But UFO enthusiasts hoping the government will deem any of the hundreds of U.S. military sightings under scrutiny as alien spacecraft visits will likely be disappointed.

The most recent incidents under investigation are attributed to a mix of foreign surveillance, including relatively ordinary drone flights, and aerial clutter such as weather balloons, The New York Times reported last week, citing officials Americans familiar with classified analysis that had to be delivered. in Congress on October 31.

Many of an older set of unexplained aerial phenomena, or UAPs, are still officially classified as unexplained, with too little data analysis to draw conclusions, the Times said.

“There is no single explanation that meets the majority of UAP reports,” US Department of Defense spokeswoman Sue Gough said in a statement this week. “We are collecting as much data as possible, following the data where it leads, and will share our findings where possible.”

She said the US government must be careful to avoid revealing “sensitive information” to foreign adversaries about what US intelligence knows about its surveillance operations and how that information comes to light.

It remains to be seen what, if anything, the UAP report says about whether any of the phenomena could be of extraterrestrial origin or even some sort of highly advanced hypersonic spy craft piloted by foreign opponents.

A spokesperson for the Office of the Director of National Intelligence, the agency responsible for submitting UAP ratings to Capitol Hill, declined to comment on the contents of the report.

The intelligence office conducts its analysis in conjunction with a newly created Pentagon office known as AARO, short for All Domain Anomaly Resolution Office, cryptically named.

The first-of-its-kind Defense Intelligence UAP report to Congress in June 2021 examined 144 sightings of U.S. military airmen dating back to 2004, most of them documented with multiple instruments.

This study attributed one incident to a large deflating balloon, but found the rest to be beyond the government’s ability to explain without further analysis.

Senior defense intelligence officials testified before Congress in May this year that the number of UAPs officially cataloged by the Pentagon’s new task force had risen to 400.

At the time, they said analysts had no evidence to suggest any of the sightings were of an alien spacecraft, but most UAP reports remained unresolved.

Among these was video released by the Pentagon of enigmatic aerial objects observed by Navy pilots showing speed and maneuverability exceeding known aeronautical technology and lacking any visible means of propulsion or flight control surfaces.

“In many cases, observed phenomena are classified as ‘unidentified’ simply because the sensors were unable to collect enough information to make a positive attribution,” Gough said. “We are working to mitigate these shortcomings for the future and to ensure that we have enough data for our analysis.”

The next release of the Pentagon’s latest assessment comes after an expert panel, the first of its kind, organized by NASA, opened a separate parallel study on Oct. 24 of unclassified UFO sighting data from civil government and commercial sectors.