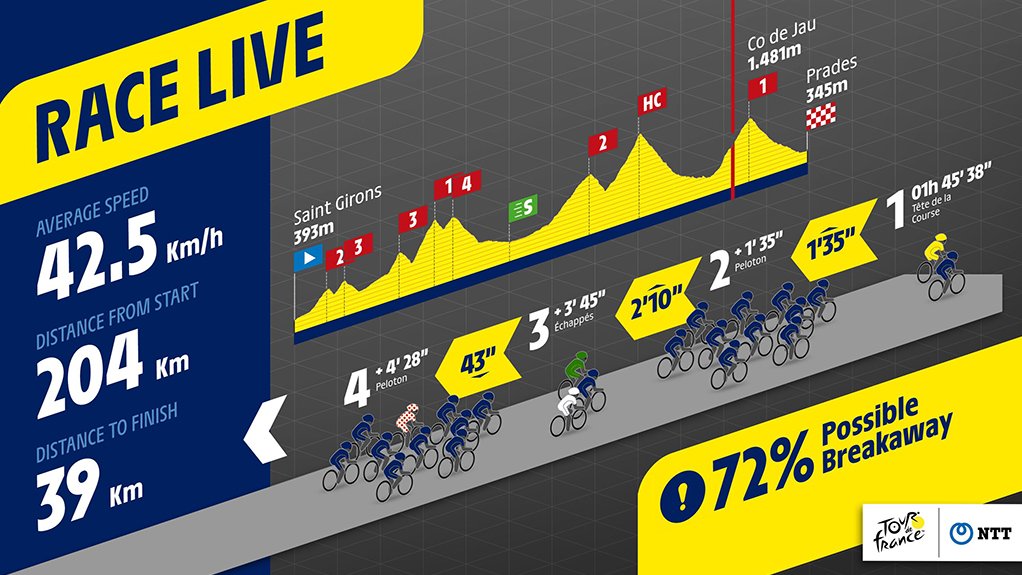 Dimension Data’s Bryanston campus in Johannesburg is currently the site of a ‘war room’ which has been specifically set up to provide real-time digital graphics and analysis to broadcasters of the 2022 edition of the race Tour de France cyclist, as well as race organisers.

Comprised of a team of data scientists and engineers, the Crisis Room is an integral part of the overall technology solution provided by Japanese multinational technology company NTT, owner of Dimension Data and technology partner of Amaury Sport Organization (ASO).

ASO owns and operates the Tour de France and the Tour de France Women with Zwift, as well as other major international sporting events, including the Dakar Rally, the Tour Voile sailing race, the Paris Marathon and the French Open. women’s golf.

The South African team is supported by NTT specialists in the UK, US, Australia and Europe to manage incoming race data and perform real-time analysis, which is then provided to broadcasters in a format that can be seamlessly integrated into their cover.

“Since starting our participation in the Tour de France eight years ago, we have used our skills in South Africa as well as our other teams around the world,” said Dimension Data Africa’s Applications Manager. South. Lauren Wortman recount Engineering News.

“In 2020, we moved to a hybrid support operation with team members around the world as well as on the ground in France.

“In 2020 and 2021 this was delivered exclusively on a virtual basis and in 2022 we transitioned to a hybrid model with a core support team supporting the Tour de France solution based out of the Bryanston campus and our Big Tech Truck ensuring that any issues that require a hands-on approach are addressed,” says Wortman.

NTT has also created a “digital twin” of the physical event, mapping all elements of the race, from riders to racing vehicles, to the course and areas around the start and finish of each stage.

“This provides race organizers with an accurate digital representation of the real world, allowing them to build plans, monitor the race in real time, and anticipate situations using real-world data.

“This capability provides ASO with the information they need to optimize racing operations and provide fans with deeper insights.”

A transponder inserted under the saddle of each bicycle continuously transmits a rider’s latitude, longitude, and speed and is transmitted through primary and secondary transmission networks.

“We designed the data collection endpoints to be redundant. This architecture was implemented so that in the event of a hardware or software failure, the automatic standby server can be activated to allow continuity of service.

NTT’s real-time analytics architecture is at the heart of the Tour de France solution, which has been designed, using multiple components and types of integration, to ingest data and analyze it in less time. a second.

The data is then aggregated, filtered and analyzed, before being applied to a set of algorithms to provide insight into the runner’s run, speed and gaps at gradients and distance to the finish.

The initial three data points of the runner’s latitude, longitude and speed are transformed into more than 50 data points, which means that for each stage of the Tour, the solution creates 50 data points per second per runner.

This information is then converted into easy-to-understand graphics that are used by broadcasters and various other platforms, including: Race Center; @LeTourData, 3D Race Tracker, media walls at the start and finish villages; and a new concept known as “Digital Human”, where NTT’s Big Data Truck offered visitors to a fan park in Copenhagen, Denmark, which hosted part of the tour, a real-time digital interface with running and local location information.

The visually interpreted data is also fed into a real-time operations dashboard to provide race organizers with complete visibility of all race elements, including racers and race vehicles.

Wortman won’t be fired at how much NTT has invested in delivering the package, but says it offers a high-profile example of the kind of solutions that can be delivered “to solve business problems beyond sporting events.”

She says that NTT has tested, scaled and implemented various technology strategies since the start of the partnership with ASO and that, for the first time in 2022, it will bring fans closer to the Tour de France Women action with Zwift, thanks to the implementation of real-time tracking of runners.

“Through this partnership, we are leveraging the expertise of Dimension Data and pushing the boundaries of what is possible in one of the most demanding sporting environments in the world.”