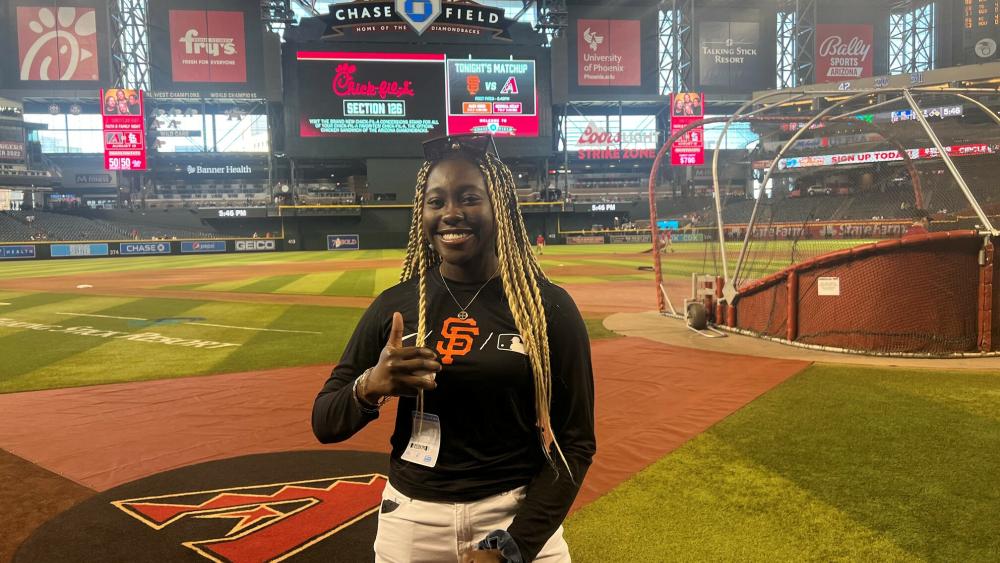 Awe, a senior data science student at Penn State College of Information Sciences and Technology, works as an intern data analyst for two minor league affiliates of the San Francisco Giants. Although Awe has always had an interest in working in baseball, she specifically sought a position with the Giants because of their highly respected research and development team, which won the award for Best Analytics Organization at the MIT’s Sloan Sports Analytics conference.

“I’m truly grateful to have the opportunity and the space to learn how data analytics and data science are used in the baseball industry,” Awe said. “Baseball as a sport has the longest history of using analytics…and it seems truly surreal to be part of where the sport has evolved so far.

Awe is a data analyst for the club’s two Arizona Complex League teams, Giants Black and Giants Orange. In his role, Awe uses the data his team collects during each game to create post-game reports. She also communicates with coaches on player development trends and generates scouting reports on opposing players.

“I’ve expanded my baseball knowledge so much, which will help me progress in my career,” she said. “I was able to answer questions while tapping into a variety of databases and resources. I also gained the ability to communicate technical and statistical information to people who don’t have a technical or data-driven background.

Awe, who aspires to work in sports analysis after graduation — and maybe even become a coach one day — realized his passion for the field through his work with the Penn State men’s baseball team. , with which she is a data analyst. There, she uses data from advanced technologies, such as Trackman, to create various types of visualizations to help coaches and players improve.

“We’re also encouraged to discuss projects we’ve worked on and insights we have during meetings with the analyst team,” Awe said. “Having this experience made me realize that I wanted to continue to develop my passion for baseball analytics, and it provided me with the space to deepen my knowledge with hands-on experience working with data and starting projects from scratch.”

She was particularly inspired by her supervisor and mentor Jake Stone, director of operations and player development for the Penn State men’s baseball team.

“Jake continued to be a great resource for all my questions and concerns,” Awe said. “He encouraged me throughout my internship and was an excellent mentor for all the student managers, in particular the analysts.”

“Last year was Jiso’s first year with the program and from our very first interaction in her interview process, I knew she was going to make a difference here,” Stone said. “She has both the technical skills and the personal skills to do great things in this game, and that was reinforced for me after hearing the feedback from her time with the Giants this summer.”

The skills she learned through her work with Penn State men’s baseball, combined with the knowledge gained from her Penn State classes, helped Awe in his internship with the Giants.

“After my first interview for the internship, I was given a type of coding assessment to do analysis on a dataset, and everything I could do in my analysis was based on things that I learned in my data science classes and was able to apply when working with the Penn State baseball team,” Awe said. “Later, when I was asked to explain my thought process when creating this analysis, I was able to look back on the values ​​of the Penn State baseball team and the way of teaching that my teachers showed me.”

Now Awe is proud to see that the work she has done so far is helping her make an impact in the minor leagues.

“The most rewarding thing about my internship is seeing the programs and reports I created being used in game planning, or to help players improve their abilities at the plate or the mound,” he said. she concluded.