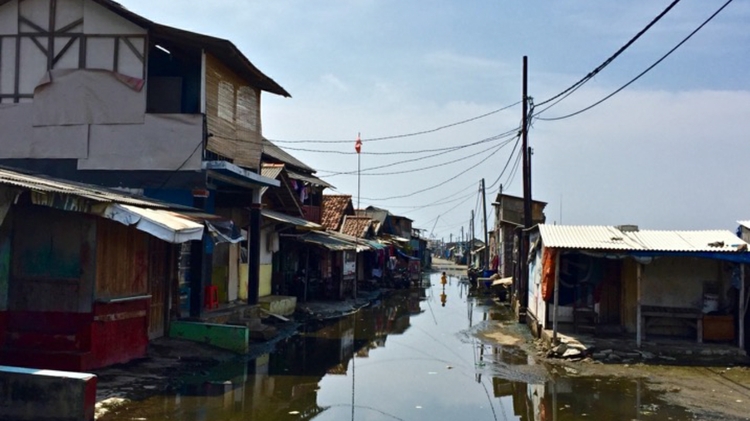 A team of international scientists has found that many densely populated coastal cities around the world are at high risk of extreme relative sea level rise as land sinks due to groundwater extraction and other industrial processes.

“By estimating how much and how fast these densely populated coastal cities are sinking, our study helps limit projections of coastal flooding in the coming decades, as we expect more land to be flooded due to sea ​​level rise and land subsidence,” said lead author Cheryl. Tay, a Ph.D. student at NTU’s Asian School of the Environment.

UNM Department of Earth and Planetary Science Assistant Professor Eric Lindsey specializes in analyzing satellite data and monitoring land subsidence rates. He is one of the co-authors of the study which began when he was a researcher at NTU’s Earth Observatory in Singapore. Lindsey spent several years in Southeast Asia studying the movement of the Earth’s surface to monitor underground hazards that could lead to disasters such as flooding in Jakarta, Indonesia.

“This study highlights the value of high-resolution satellite observations to better understand this problem – subsidence rates can vary rapidly over small areas, meaning terrestrial measurements often do not capture the true magnitude of the problem.” Lindsey said.

To acquire precise measurements of land subsidence, Lindsey and his co-authors compiled data collected by Sentinel-1 satellites operated by the European Space Agency (ESA). Since the launch of the first Sentinel-1 satellite in 2014, they have orbited Earth using radar to measure subtle changes in surface elevation. This technique is known as Interferometric Synthetic Aperture Radar or InSAR. Each Sentinel-1 satellite takes 90 minutes to complete one orbit.

However, due to the Earth’s rotation, a satellite can take up to 12 days to pass the same location twice. This results in bimonthly observations of the Earth’s surface for every point on the planet. ESA collects, stores and provides free global access to raw data that is transmitted back to Earth.

To further his research on land subsidence, Lindsey has partnered with UNM’s Center for Advanced Research Computing (CARC) to house and process data that will help researchers determine the true state of aquifers around the world. , with a focus on the state of New Mexico.

To create land subsidence maps, Lindsey first compiles all of the satellite imagery collected over an area. This means that it regularly uploads hundreds or thousands of high resolution images covering around 24,000 square miles each. This data is combined and processed together to form a record of the slow movement of the ground towards or away from the satellite, with an accuracy of a few centimeters or better. However, the large number of images required in this process takes up tens of terabytes of data. This huge amount of data can be problematic and requires massive storage capacities.

“For this study, we used a cloud processing system which gave us access to great processing power and nearly unlimited storage,” Lindsey said. “However, we found that this flexibility came at a much higher cost than if we could host the data locally.”

To help address these storage issues, Lindsey recently received a grant from the National Science Foundation (NSF) to establish new data storage nodes at UNM CARC. This increased storage capacity combined with CARC’s high-speed parallel computing capabilities will allow it to process the hundreds of terabytes of data needed to update these coastal land subsidence maps as well as examine the land subsidence caused by groundwater extraction in the southwestern United States.

The 48 cities studied in the NTU study were selected based on a minimum population of five million in 2020 and located no more than 50 kilometers from the coast. A comparison of coastal cities around the world shows that the fastest rates of relative local land subsidence are concentrated in Asia, particularly Southeast Asia.

Land subsidence varies at neighborhood and even block level, but across the 48 cities studied, the team found a median sinking rate of 16.2 millimeters (mm) per year, while some of them have land sinking at 43 mm per year. The current global average sea level rise is 3.7 mm/year. Coastal cities experiencing notable land subsidence with a rate greater than 20 mm per year include Tianjin (China), Ho Chi Minh City (Vietnam), Chittagong (Bangladesh), Yangon (Myanmar), Jakarta (Indonesia) and Ahmedabad (India). ).

The results are an example of groundbreaking research that seeks to address humanity’s grand sustainability challenges and accelerate the translation of research findings into innovations that lessen human impact on the environment.

“Our study highlights the fact that although this is a global problem, the response in many cases must be local,” Lindsey said. “Slowing the rate of groundwater extraction to a sustainable level should be a top priority for all municipalities in coastal areas.”

Image cut line: A girl plays in flood waters resulting from land subsidence that left her neighborhood below the high tide line. Home to more than 20 million people on the island of Java, Jakarta (Indonesia) is one of the many cities currently facing this problem. Photo credit: Eric Lindsey, University of New Mexico.