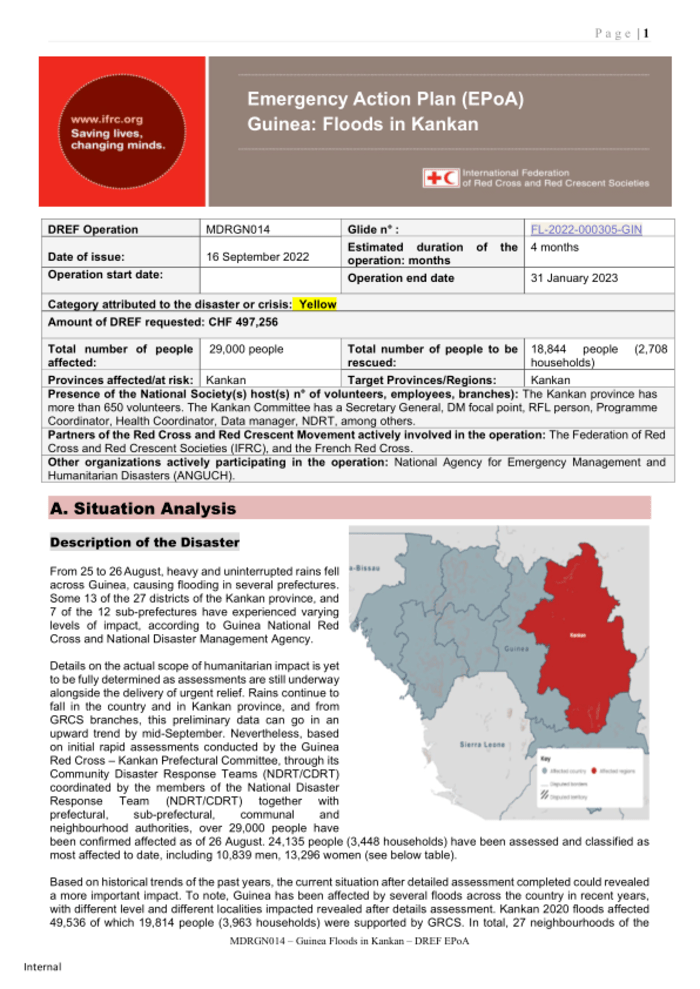 Description of the disaster

From August 25 to 26, heavy and uninterrupted rains fell on Guinea, causing flooding in several prefectures. According to the Guinean Red Cross and the National Disaster Management Agency, some 13 of Kankan province’s 27 districts and 7 of 12 sub-prefectures have experienced varying levels of impact.

Details on the true scale of the humanitarian impact have yet to be fully determined, as assessments are still underway alongside the provision of emergency relief. The rains continue to fall in the country and in the province of Kankan, and according to the antennas of the GRCS, these preliminary data can go in an upward trend by mid-September. Nevertheless, based on initial rapid assessments conducted by the Guinean Red Cross – Kankan Prefectural Committee, through its Community Disaster Response Teams (NDRT/CDRT) coordinated by members of the National Disaster Response Team Intervention in the event of Disaster (NDRT/CDRT) in collaboration with the prefectural teams, -prefectural, communal and district authorities, more than 29,000 people have been confirmed affected as of August 26. 24,135 people (3,448 households) have been assessed and classified as the most affected to date, including 10,839 men, 13,296 women (see table below).

Based on the historical trends of recent years, the current situation after a detailed assessment may reveal a greater impact. Of note, Guinea has been affected by several floods across the country in recent years, with different levels and different affected localities revealed after a detailed assessment. The 2020 Kankan floods affected 49,536 people of which 19,814 people (3,963 households) were supported by GRCS. In total, 27 districts of the urban commune and 12 sub-prefectures were impacted. In 2021, heavy rains affected 69,671 people, i.e. 9,953 households, with 1,972 homeless, 21 injured and 05 deaths recorded in the Siguiri prefectures (43,815 people, 6,280 households); Gueckédou (9,305 people affected, 1,364 households) and Conakry (16,551 people affected, i.e. 2,309 households).

This DREF operation will cover the needs of 18,844 people (2,708 MH) among the most affected population, as decided jointly with the main stakeholders and the agreed prioritization criteria. Affected communities and authorities are seeking the support of humanitarian organizations to recover from the ills they are currently suffering. It should be noted that Guinea continues to experience unusually heavy rain showers across the country, with the possibility of flooding in other parts of the country.