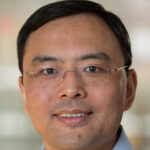 The world is increasingly dependent on artificial intelligence.

Smartphones, smart homes, social media, cars and other modern devices use AI, and innovations created by Professor Wei Lu of the University of Michigan are paving the way for the creation of more powerful AI systems and more efficient.

For his pioneering efforts in the development and commercialization of new electrical devices, Lu, a professor of electrical engineering and computer science, won this year’s Distinguished University Innovator of the Year award.

The Distinguished Academic Innovator of the Year award honors faculty members who have developed transformative ideas, processes or technologies and brought them to market. It was established in 2007 and is supported by endowments from the Office of the Vice President for Research and the Stephen and Rosamund Forrest Family Foundation.

“Above all, we are a public research university, and so we all have a unique responsibility to ensure that our discoveries and innovations are not confined to our labs and studios,” said Rebecca Cunningham, vice president for research and the William G. Barsan Collegiate Professor of Emergency Medicine.

“As a research community, we need to translate our work to have a positive impact on the world around us. Professor Lu truly embodies the broader vision of the university to develop and implement innovative products and solutions for the betterment of society.

OVPR selected this year’s recipient based on the recommendation of a faculty selection committee that reviews a pool of applicants. Lu will receive the award on October 13 at the annual Celebrate Invention event at the Michigan Union.

Designing for the next generation of AI

Lu realized early on that the future of computing hinged on the ability to develop computing memory devices powerful enough to support AI-enabled applications. Upon joining UM in 2005, Lu began working with a research team to tackle this problem.

Traditional computers are built with separate memory and processor chips, and the cost of constantly transferring data between them severely limits their overall efficiency. Lu and his research team developed a new type of computer memory device that could be used to both store and efficiently process data in the same device.

“The way we live, work and socialize has been fundamentally changed by recent advances in semiconductors,” said Mingyan Liu, professor of electrical engineering and computer science, and holder of the Peter and Evelyn Fuss Chair in Electrical Engineering. and IT, who nominated Lu for this year award.

“At the heart of these developments is the ability to efficiently store massive amounts of data and the ability to efficiently process the data to produce useful insights. Professor Lu has made significant contributions in both fields, including the invention of fundamentally new memory devices and computer circuits, leading to their successful commercialization,” Liu said.

In 2018, Lu and Zhengya Zhang, both professors of electrical engineering and computer science, co-founded MemryX Inc., a UM startup focused on commercializing these in-memory computing solutions. Prior to founding MemryX, Lu co-founded Crossbar Inc. in 2010 and led its efforts to transfer device technology from academic research to commercial manufacturing.

“Through our research and commercialization efforts, we hope to bring transformative change that will allow us to seamlessly integrate AI applications across many industries,” Lu said.

AI Accelerator chips developed by MemryX are already being tested by customers, while Crossbar has established several product lines with its innovative ReRAM technology.

Regarding the commercialization process, Lu said of his experience at UM, “I am grateful for the support I received at the University of Michigan to launch my two businesses. Innovation Partnerships has always been available to help me navigate the commercialization process, and I am also grateful for the unparalleled contributions of my UM faculty collaborators, students, and alumni.

Lu will receive the award at the annual Celebrate Invention event on October 13 at the Michigan Union. Celebrate Invention is free, and the public is welcome and encouraged to attend this celebration of UM inventors and the growing impact of university innovations. Registration is mandatory.