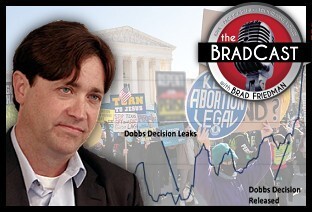 As of today BradCast: It’s no surprise that Fox ‘News’ made a mistake months, if not years, of a “red wave” or “tsunami” coming for the 2022 midterm elections. It should come as no surprise that the theoretically legitimate media have also been wrong, given that they seem to be making the same mistakes election after election. And yet, it’s both surprising and disappointing, given that the data to counter their misguided narrative was there in front of their faces the whole time…if they just bothered or had the courage to listen to it. [Audio link to full show follows this summary.]

“There was nothing magical about what I did”, our guest today, TOM BONIER from the Democratic data research company, TargetSmart, explains. “It was, as you say, seeing the numbers and reporting the numbers and at the end of the day trying to stay away from the predictions or the projections but saying, ‘Look, this is what we’re seeing. “.”

Bonier is well documented Twitter feeds on the data over the past few months have clarified what should have come as no surprise to anyone. In the face of right-wing extremism and, in particular, in the Supreme Court, there has been a backlash against Republicans that has served to strengthen Democrats at all levels.

Prior to today, Bonier joined us twice in the past few months to discuss his analysis of the data and what he was seeing and tweeting to anyone who would have cared to listen. At the end of August, after dark red voters Kansas decisively rejected a ballot initiative that would have rewritten the state constitution to ban abortion, he joined us in explaining what he considered a “breathtaking” spike in the news voter registrations for young female Democrats following Supreme Court ruling Dobbs decision at the end of June, canceling Roe vs. Wade. Bonier saw similar spikes in new records all over the map, in “red” and “blue” states, but particularly where reproductive rights were most at risk.

In late September, he joined us after analyzing specific voter data from that failed Kansas referendum. Tangible evidence of an incredible increase in the number of women voters that, he told us at the time, “just doesn’t happen in elections.” He posited that any suggestion that Democrats would be overwhelmed in November, as the so-called conventional wisdom offered by pundits says, simply ignored the available data. He maintained that the election would be very close and certainly not a “wave” for the GOP.

He was right. Even though, over the past month, as Election Day approached, the corporate media was, largely in step, warning that the Democrats were screwed, soon to be overwhelmed by a red wave or even a tsunami! How many of these misguided experts “blunted” the final results, Bonier laments, citing races like Mandela Barnes’ in Wisconsinwhere the Democratic candidate for the US Senate failed to unseat Republican incumbent Ron Johnson by a single point.

We discuss, among other things, the “Republican polling deluge” in the final weeks of the campaign and how it distorted the forecasts of polling aggregation sites like FiveThirtyEight, and how his fellow traveler, Simon Rosenbergwho was also right, was “mocked” when he pointed out how overwhelmed the forecasts were by those bad GOP polls.

In and of itself, the failure of the media “does not happen. It took a certain level of complicit behavior on the part of those who should be protecting themselves from it”, insists Bonier. “People are laughing at Fox News at this point. We know this is a very biased Republican media platform. say, as I spoke with reporters in the last few weeks, I would tell them, “Look, this is going to be a close election. I don’t see a Republican wave. I don’t see that in the numbers.” And I was almost mocked by the journalists.”

But why? Is it a lack of courage to move away from pack journalism and groupthink? Or, as media critic Dan Froomkin argued today, a symptom of systemic “rot” in the political media? Bonier offers his candid thoughts on this and more as we delve into today’s discussion. I strongly urge you to connect to it fully.

Also today, in addition to our own Fox “News” mockery, we have plenty left to mock at people like HBO’s Bill Maher and Spotify’s Joe Rogan and CNN’s Fareed Zakaria and NY Times‘Maggie Haberman who everything was also wrong – and misled the American electorate – for many of the reasons discussed in today’s program. And, we also have the latest reported results of the yet-uncalled critical races for U.S. Senate, Governor, Sec. of State and Attorney General of Arizona and Nevada…

While we publish The BradCast here every day, and you can hear it on all of our great stations and affiliate websites, to automatically get new episodes as they become available, sent straight to your computer or personal device, subscribe for free on iTunes, Stitcher, TuneIn or our native RSS feed!

[Cross-posted from The BRAD BLOG…]