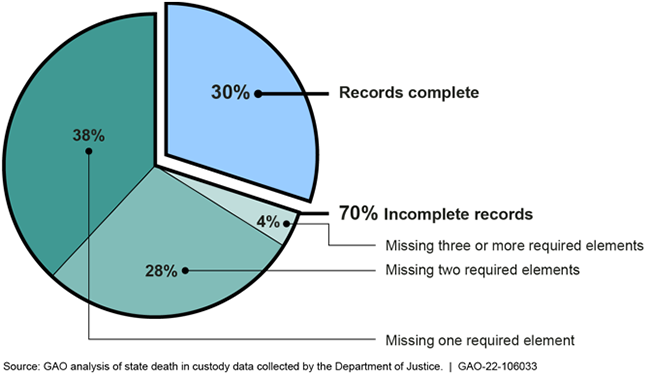 What the GAO found

The Department of Justice (DOJ) has taken some steps to meet the data collection and reporting requirements in the Deaths in Custody Reporting Act of 2013 (DCRA). For example, the DOJ has collected and published data on deaths on federal law enforcement premises and has collected similar data from states.

While U.S. states and the DOJ have undertaken multi-year efforts to collect data on deaths in custody, the DOJ told us it has not studied this data for the purpose of meeting the requirement. of study and declaration in the DCRA. Specifically, DOJ officials told GAO in September 2022 that they had not studied state data, in part because the data was incomplete. The GAO compared fiscal year 2021 records that states submitted to the DOJ to publicly available data and identified nearly 1,000 deaths that potentially should have been reported to the DOJ but were not. Additionally, the GAO found that 70% of records provided by states were missing at least one element required by the DCRA, such as a description of the circumstances surrounding the individual’s death or the individual’s age (see figure). .

Percentage of in-state death records in custody that were complete or missing required items, fiscal year 2021

The DOJ has taken certain steps to assess the quality of submitted data reports. However, as of August 2022, the DOJ had not finished assessing the quality of data collected from states and had not determined whether states were complying with the DCRA. Additionally, the DOJ has not developed a detailed implementation plan that includes corresponding performance measures and targets to determine state compliance, or roles and responsibilities for taking corrective action. The DOJ has previously acknowledged that determining compliance could help improve the quality of data on deaths in custody in the state. Developing an implementation plan would better position the GM to achieve this goal or take corrective action if its current approach is not fully successful.

Finally, even if this data were of sufficient quality, the DOJ is not required by the DCRA to release state data on deaths in custody and, as of September 2022, had no intention of doing so. . In the absence of congressional guidance to help ensure that any future state data collected is used beyond the required study, the DOJ and states may continue to use resources to compile a national data set. which cannot be used to help inform practices aimed at reducing deaths in custody.

Why GAO Did This Study

According to the DOJ, people incarcerated in jails and prisons are at a higher risk of dying by suicide and homicide while in custody. The DCRA was enacted in 2014 to encourage the investigation and reporting of deaths in custody. The law requires states receiving certain federal grants — as well as federal law enforcement agencies — to report information about deaths in custody to the DOJ. The law also requires the DOJ to study this data and report its findings to Congress.

This statement describes (1) the steps the DOJ has taken to meet data collection and reporting requirements in the DCRA, and (2) the extent to which the DOJ has reviewed and used data collected from states to help reduce deaths in custody.

This statement is based on the GAO’s December 2021 report on DOJ’s efforts to collect and publish data on the use of force by law enforcement (GAO-22-104456) as well as work by additional audits conducted from May 2022 to September 2022. To complete the prior work, GAO reviewed relevant statutes and DOJ documents and interviewed DOJ officials. For additional audit work, GAO reviewed DOJ documentation, interviewed DOJ officials, and assessed the reliability of data collected by the DOJ from states.