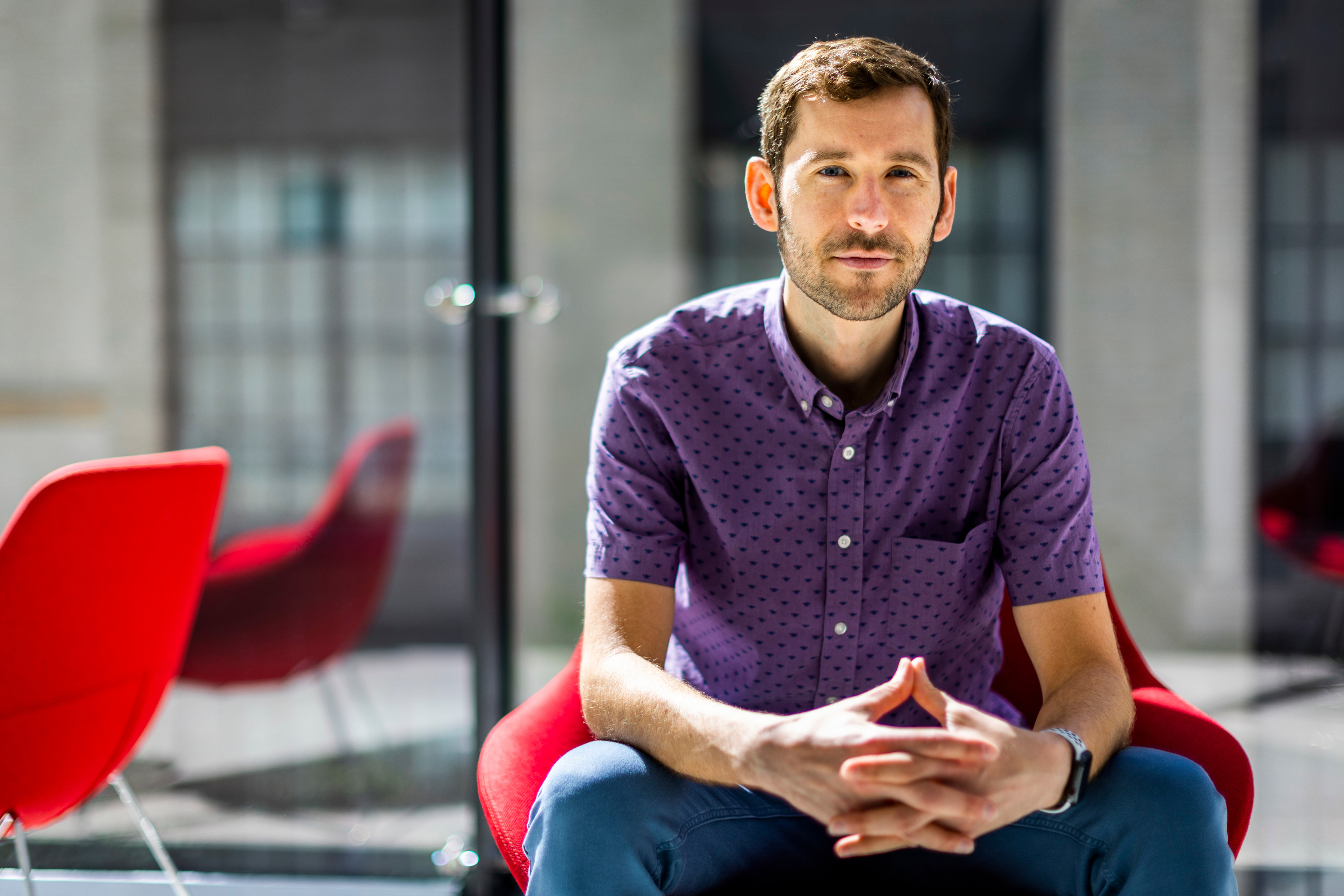 To explain why he loves electron microscopy, Associate Professor James LeBeau uses an analogy: he compares the technique, which uses beams of electrons to illuminate materials at a scale thousands of times smaller than conventional microscopes, to the reverse of astronomy.

“It’s the discovery of things that no human has ever seen before that really captures the imagination,” says LeBeau. “There is beauty in the way atoms are arranged in materials, especially at defects, which give rise to all kinds of material behavior.”

LeBeau has used this passion to develop new techniques for collecting and interpreting data in electron microscopy that can be used to describe materials more fully. He has applied these techniques to explain the behavior of materials in fields ranging from electronics and optics to energy storage, quantum computing, and more.

“Beyond explaining the properties of materials, electron microscopy also has an important computational component, as it is used to analyze data that might have been previously overlooked and to draw conclusions about the data in new ways. And , with the establishment of the College of Computing, it’s an exciting time to be at MIT,” he says.

LeBeau became interested in engineering while helping his father build and fix things around the house, and he discovered a love for science at a young age.

“Science can provide an explanation of the world around us beyond supernatural beliefs,” says LeBeau. “For me, science was about making sense of the world.”

LeBeau first learned materials science at the technical high school he attended in Indiana. But it wasn’t until he was an undergraduate at Rensselaer Polytechnic Institute in New York that a few defining experiences helped him chart his course in life.

During his first year, he participated in a project using data science to predict the properties of materials.

“After that, I was hooked, and at that point I knew I wanted to go the academic route,” he recalls. “Just being able to explore things and having that academic freedom really appealed to me.”

A few years later, in 2005, LeBeau participated in a summer research program for undergraduate students at what is now the Materials Research Laboratory at MIT. The experience, in which he incorporated biopolymers into a molding process, sparked his interest in using materials science for sustainability. The passion of the researchers around MIT has also had a lasting impact on it.

Finally, as a senior, LeBeau got his first taste of electron microscopy.

“We would be in the lab in the middle of the night analyzing these materials, and that excitement caught my attention pretty early on,” says LeBeau. “No matter how hard I worked – I loved doing it, and it set the stage for the rest of my career.”

During his doctorate at the University of California, Santa Barbara, LeBeau was part of a team that showed that scanning transmission electron microscopy theory and experiment are in very good agreement and, in turn , that attograms (one millionth of a trillionth of a gram) of material could be weighed directly from electron microscopy images without the need for external microscope calibration standards.

LeBeau also discovered a passion for biking through the mountains near the UC Barbara campus, an activity he continues by cycling thousands of miles a year, including to MIT almost every day. whatever the weather.

After his doctorate, LeBeau accepted a professorship at North Carolina State University, where he worked for eight years before a similar position opened at MIT in 2019.

Since moving to MIT, LeBeau has helped the Institute adopt state-of-the-art electron microscopy equipment that researchers across campus have benefited from at MIT.nano and elsewhere.

“As an electronic microscopist, the equipment I use is extremely expensive to maintain and requires it to become a shared resource. I’m glad that’s the case because ultimately users across campus benefit from these tools and advance their science through this shared infrastructure,” says LeBeau. “More generally, the microscope regularly challenges what people thought they knew about the materials they were studying. The results are always exciting.

When it’s his group’s turn to use the microscope, LeBeau says they’re trying to tackle tough problems that require new ways to collect and interpret data.

“We choose questions that aren’t easily answered by other methods and that require new ways of extracting information from our datasets to draw conclusions,” says LeBeau.

One type of material LeBeau has studied is ferroelectric relaxers, which are used for applications such as ultrasound, actuators, and energy storage. The materials have been studied for decades but are extremely heterogeneous at the nanoscale, making it difficult to explain their electromechanical properties. By analyzing the materials’ structure using new electron microscopy techniques, LeBeau’s group was able to explain its properties in a way that could help create more durable versions of the material, which currently contains lead.

“Impact is always at the forefront of everything we do,” says LeBeau. “When we are looking for problems, the application space is very important because it tells us if the information can change the functioning of an entire space.”

One area of ​​LeBeau’s research is exploring ways to use machine learning to help the microscope collect data faster than a human could.

“Transmission electron microscopy in general is often a very slow technique,” says LeBeau. “But you can imagine a case where a stand-alone microscope is able to align a microscope and sample much faster and much more reproducibly than a human. This would allow us to collect a complete statistical description of the material. This is where machine learning can play a role: in extracting more data from what we have already acquired, but also in the acquisition itself. »

Indeed, making electron microscopy more quantitative and reproducible has been a theme of LeBeau’s career. But he doesn’t think quantifying something comes at the expense of creativity.

“Science really is a creative outlet,” says LeBeau. “Creativity comes not only from creating new designs or theories of experiments, but also from deciding to present your data in a visually appealing and informative way. There is a major creative element to what we do.