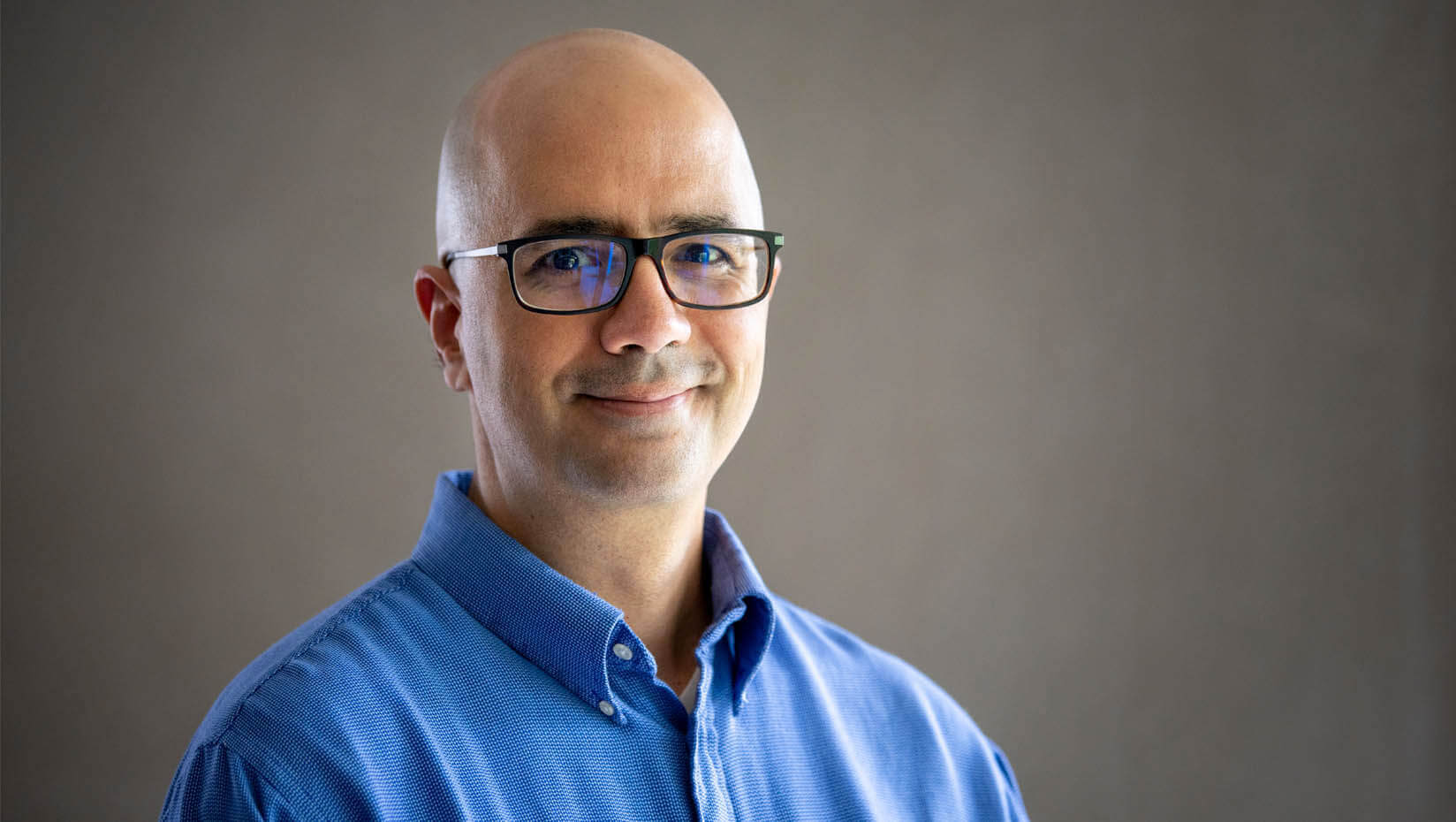 André Khalil’s Computational Modeling, Image Analysis and Numerical Experiments (CompuMAINE) Laboratory has used image analysis techniques to solve a range of problems at all scales, from cancer cells to galaxies . And he’s only scratched the surface of his potential.

Since 2008, more than $1 million in funding has supported CompuMAINE research using image analysis for the early detection of breast cancer. In addition to the highly publicized and acclaimed cancer research that led to two patents, Khalil’s lab has studied mathematical fractal structures, nuclear structure in developing embryosthe genetic basis of Huntington’s disease, receding glaciersthe relationship between size and position of chromosomes and seizure indicators.

The common thread running through all of this research, whatever the subject, is the innovative application of image analysis tools that Khalil has experimented with throughout his career. For Khalil, however, the tools themselves are less important than how scientists use them.

“There are labs that dedicate their work to image analysis,” Khalil says. “I think in our lab, image analysis is the tool we use to study science. This may be a subtle but important difference for us. I find it more rewarding to engage more with the underlying application.

Interdisciplinary science has always been part of Khalil’s life. His father trained as a chemist, but eventually worked as an oceanographer in the estuaries of their native Quebec.

“He said, ‘Before, there was only biology and chemistry and that was separate – somewhere along the way we had biochemistry,'” Khalil explains. “He used to say these things to me when I was a kid.”

Despite being taught by his father, Khalil studied mathematics for his undergraduate and master’s degrees at Concordia University in Montreal – and, for him at the time, “the purer the better”. “.

“If there were no potential applications for what we were doing, that’s what appealed to me,” Khalil says.

Upon completing his master’s degree, however, he discovered fractal geometry, known in the field as the “geometry of nature” because patterns appear throughout the natural world, from root systems to rugged coastlines. As he delved into the world of fractals, he read Stephen Hawking’s book “A Brief History of Time” and decided he wanted to use his math skills for real-world applications.

Khalil completed an interdisciplinary doctorate. in mathematics and astrophysics at Laval University in Quebec, where he studied images of the interstellar medium to observe the distribution of atomic hydrogen in the galactic plane. While on a postdoctoral fellowship at the Jackson Laboratory in Bar Harbor, he moved from astrophysics to biophysics using similar image analysis tools and techniques on a completely different scale.

“We can extract a lot of meaningful information from an image using these techniques,” says Khalil. “You go from light years to microns, but many physical processes are universal, no pun intended.”

At the Jackson Laboratory, Khalil bonded with researchers at UMaine, and after a few months he joined the math department in 2005. In 2008, he started a project funded by the Maine Cancer Foundation to use the image analysis to better predict breast cancer. from mammograms. The research falls within the field of radiomics, a new area of ​​medical study that aims to extract large amounts of quantitative features from medical images using data characterization algorithms.

Part of the reason he was interested in research was personal. He had family members who had cancer. He also had much to offer the study of breast cancer with his unique set of research skills.

“Mammography is like heaven for data analysis,” says Khalil. “Women go for their annual or semi-annual screenings – depending on health insurance coverage and the country you’re in – and you have tons and tons of data, which you don’t have. ‘other cancers.’

By analyzing imagery taken by scientists at the University of California, Berkeley, Khalil realized that cancer cells are more dynamic than healthy cells, performing a kind of disorganized “drunk dance”. Looking for patterns of disorganization in mammogram images, Khalil and Kendra Batchelder, who is doing an interdisciplinary doctorate. in computational biomedicine, found that doctors could better predict a patient’s risk of developing breast cancer tumors.

Also, because there is so much mammogram-related data, Khalil and his team can look at the images over the years and see what the result was to test their hypothesis.

“We found more of this disrupted tissue in a mammogram of a tumor breast,” Khalil says. “Not only can this possibly be used as a diagnosis, but it could be pre-detection. Is there a tumor disturbing the terrain, or is the terrain disturbed and then the tumor appears? We think it’s the latter.

In January 2018, Khalil joined the Department of Chemical and Biomedical Engineering at UMaine. Although his research uses mathematics and he enjoys teaching the subject, his research at CompuMAINE has focused much more on applying this knowledge to chemical and biomedical engineering – exactly the type of interdisciplinary research he may have. to be always meant to do.

“In the same way that Cancer is efficient if it uses a fractal structure, in the interstellar medium the galaxy will be more efficient at forming new stars if it uses physics similar to Cancer,” Khalil says. “There is a shiver in the back. It’s really universal.

In September 2020, CompuMAINE received a three-year, $423,000 grant from the National Cancer Institute to continue work on computational analyzes of mammograms, and also expand work to analyzes of breast tissue from biopsies, lumpectomies and mastectomies with the help of Karissa Tilbury, Assistant Professor of Chemical and Biomedical Engineering.

The grant awarded to Khalil and Tilbury was only the fourth given to UMaine by the National Cancer Institute and the first to the College of Engineering.

“Pathology is the clear answer, the last call,” Khalil says. “The end goal is to see, we have the data in different forms from the same patient, how can we fit it into one multivariate space.”

Khalil and Batchelder are actively pursuing the commercialization of their computational approach to breast cancer risk analysis. They have received two patents on related technology and participated in UMaine commercialization programs designed to help them identify product-market fit and accelerate development.

Two grants of $25,000 (one from the Maine Technology Institute and another from National Institute of General Medical Sciences) supported their marketing efforts, and the pair recently completed UMaine’s MIRTA Acceleration Program. With the help of Jeremy Juybari, a Ph.D. student in computer engineering co-directed by Khalil, they are currently participating in a cohort of the National Science Foundation’s I-Corps National Program as the next step towards product development. commercial that could be used to identify breast cancer risk from mammography. The lab received an additional $50,000 from the National Science Foundation for its participation in this program.

“We’re all that attention-deficit generation, moving on when we get bored, with the underlying commitment to finish what we started,” Khalil laughed. “It has been very rewarding to have this opportunity to work on projects in such different disciplines. But perhaps what I value most is the successful integration of undergraduate and graduate students into all aspects of these research activities. That’s really what I love so much about my career so far.