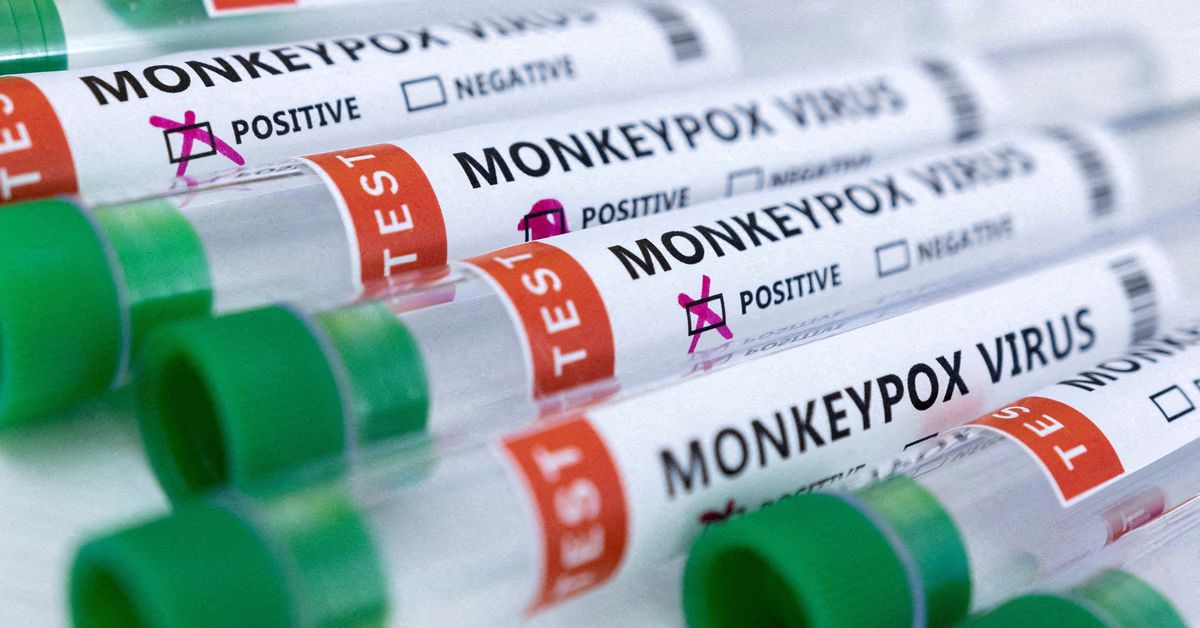 LONDON, Aug 23 (Reuters) – Reliance on insufficient vaccines and questions over their best use are hampering efforts to curb the global spread of monkeypox which has hit dozens of countries for the first time, according to health officials.

There are only 1.5 million vials of monkeypox vaccine from Bavarian Nordic (BAVA.CO) administered or currently available in the ten worst-affected countries, which account for nearly 90% of all cases. The vast majority of doses are in the United States. The figures are based on a tally of government filings by Reuters and highlight for the first time the scale of the global supply shortfall.

The World Health Organization (WHO) estimates that 10 million doses will be needed to protect those most at risk, with the current focus on certain men who have sex with men and contacts of infected people.

Other experts say an equitable global response would also prioritize an unknown number of high-risk people in the 11 countries in Africa where monkeypox has been a public health problem for years.

Several countries, including the United States, Britain and Spain, are expanding available doses, with unknown results.

Indeed, the Nordic Bavarian vaccine has not undergone clinical trials to assess the vaccine’s ability to prevent monkeypox in humans, although early studies suggest it will provide some protection.

“The whole monkeypox vaccination strategy is associated with many uncertainties,” said Dr Dimie Ogoina, professor of medicine at Niger Delta University in Nigeria and member of the emergency committee of the WHO against monkeypox.

Research by Ogoina in 2017 highlighted possible sexual transmission of monkeypox in Nigeria – where no vaccine is or has been available.

“Unfortunately, I’m not sure the health authorities are communicating these uncertainties to the public,” he added.

More than 40,000 people have already been infected with monkeypox this year, a virus that spreads through very close contact.

About 10% were hospitalized for severe pain and 12 people died. The WHO has declared the outbreak a global health emergency, its highest alert level.

Disease experts are wary of wealthy countries’ emphasis on vaccination as the first line of defense given these issues, as well as signs that behavior change, testing and contact tracing are also important .

New monkeypox infections appear to be leveling off in Britain, Spain and Germany, a trend attributed by experts to behavioral change in risk groups.

“The first control strategy is behavior change: asking high-risk people to reduce high-risk activities, such as anonymous dating and/or sex parties, and to engage in behaviors that may reduce risk, such as using condoms, screening your body for rashes and screening your sexual partners’ bodies for rashes before sex,” Jay Varma, director of the Cornell Center for Pandemic Prevention and Response told United States.

“The problem with this approach is that it is not sustainable.”

Countries are setting up trials to assess the vaccine’s impact, including the United States, Britain, Germany and Spain, although it’s unclear when the results might come out.

Bavarian Nordic’s vaccine – called Jynneos, Imvanex and Imvamune, depending on the country – is the only vaccine authorized by regulators in the United States, Europe and elsewhere to prevent monkeypox.

Last week, the Danish company said it had signed up with a US manufacturer to help expedite the delivery of doses.

The company initially produced one batch – between 200,000 and 300,000 doses – per week, but since this outbreak began in May, production has doubled, a spokesperson told Reuters.

Bavarian Nordic expects in-house capacity to triple by the end of 2022 from what it was in May – and is also in talks with several other companies to increase manufacturing capacity, the carrier added. -word.

Britain, Canada and Germany administer one dose per person instead of two, allowing them to inoculate more people even though each may receive less or less lasting protection.

In the United States and Europe, there is a push to get up to five doses out of a single dose, injecting the vaccine differently. Read more

“You know the saying – if you don’t know where you’re going, any road will get you there? Some days that happens,” said University of Minnesota epidemiologist Michael Osterholm.

The vaccine was originally developed to protect against smallpox, should this disease reappear. But scientists are confident it will provide at least some degree of protection against the similar monkeypox virus.

Jynneos’ regulatory approvals are largely based on animal experiments with monkeypox, as well as data showing that it is safe and elicits an immune response in humans.

In total, only 40% of countries experiencing monkeypox outbreaks currently have access to the vaccine, according to a WHO spokesperson.

Brazil and Peru, for example, among the most affected countries in the world, do not yet have vaccines, although negotiations are underway and deliveries are expected later this year. The WHO is trying to set up an equitable distribution mechanism, but does not have access to the vaccines.

“You can’t allocate doses that you don’t have,” said Nicole Lurie, director of preparedness at the Coalition for Epidemic Preparedness Innovations (CEPI), which participated in the discussions.

Until more supply and data on effectiveness become available, governments should prioritize the vaccine for the most vulnerable, such as immunocompromised men who have sex with multiple male partners, some have said. disease experts.

Yale University scientists estimate that less than half of high-risk men need to be vaccinated to bring the outbreak under control, based on monkeypox infectivity, contact tracing efficiency and vaccine effectiveness – all unknown.

“We’re really in a race against the virus,” said study co-author Melanie Chitwood from the Yale School of Public Health.

“What’s troubling about the global vaccine shortage is that the longer it takes us to reach the critical threshold of vaccinated individuals, the more time the virus has to do its job.”