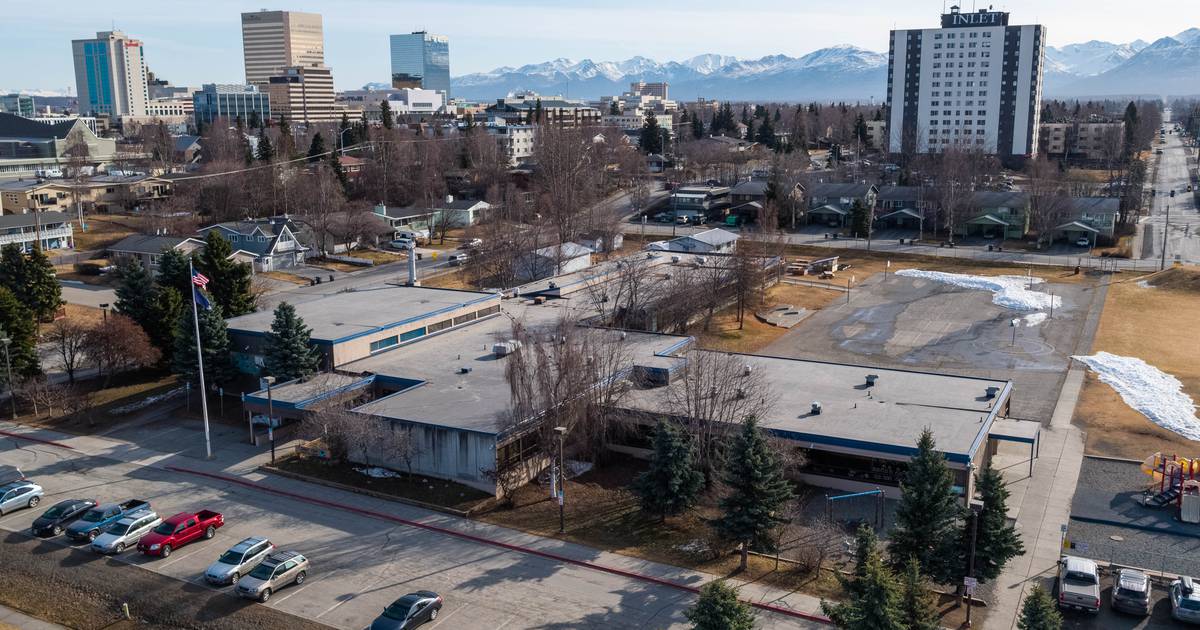 Inlet View Elementary School is in an Anchorage neighborhood lined with sidewalks and dense with small free libraries, a place people say is proud of its connections and civic spirit. But an unexpected contentious battle is brewing at South Addition, unfolding in estranged relationships, angry text messages and sparring Nextdoor messages.

It all has to do with the future of primary school. Inlet View Elementary is known for being small and welcoming, a school where teachers stay for decades. It is so popular that families in other areas of Anchorage enter a lottery so their children can attend. This year, there is a waiting list of 27 students for the new kindergarten class, according to the Anchorage School District.

But the school building dating from 1957, one of the oldest in the district, is deteriorating.

The Anchorage School District’s plan to build a new school building on the south side of the Inlet View Elementary property and tear down the old one has been met with fierce resistance from a few neighbors who have spent hundreds of hours on oppose the plan.

On one side is a collection of frustrated parents and neighbors who are losing patience with a long-delayed project they believe is essential to keeping students at a beloved school. On the other are a handful of vocal, organized residents who argue their concerns about the new design have been ignored.

Things went from simmer to boil this month when an Anchorage School District’s $111 million bond, including $31 million to pay for construction of the replacement building, failed. Some have suggested that the efforts of opposing neighbors are to blame for the failure of the school bond and the further delay of reconstruction.

Representative Zack Fields, whose State House district includes South Addition, texted two voters who organized against the new conception that “there is a special place in hell for people who oppose schools that the children of a neighborhood need”.

The situation has ‘pitted neighbors against neighbors in a way I never thought would happen,’ said Lois Epstein, one of the neighbors who opposes the design plan to rebuild on the south side of the lot. .

A building at the end of its life

Parents praise Inlet View for its caring teachers, warm community, and International Baccalaureate program, the first in an ASD elementary school. The geographic boundaries of the school’s services include South Addition, Bootleggers Cove, Downtown, and the Huntington Park neighborhood. Twenty-three percent of students are eligible for free or reduced-price lunch, according to district data.

The Inlet View building is at the end of its life and almost all systems are outdated or failing, according to parents and district documents. Sewage spilled onto the playground at some point last year. There is no fire sprinkler system. The gym is also the dining room. The building has a capacity of 170 students, but 216 attend.

Parents started rallying to get a new school built many years ago, said Petra Wilm, a neighbor and parent of an Inlet View student who took part in the effort. (Wilm, an architect, is not professionally involved in the design work.)

There has been a long and complicated history of attempts to move the project forward. Finally, after multiple studies, the district settled on a design plan that called for a new building, saying it would be the least expensive option in the long run.

In 2020, an ASD school bond included $3.34 million for design work. Last fall, the planned reconstruction was unveiled to the neighborhood: a two-story building on the south side of the lot with greater capacity to accommodate future growth. Students attended school in the old building during construction, and the original structure would eventually be demolished.

After the new design became public, a few neighbors banded together to fight the plan to move the building from the northern edge of the property to the south.

“People not only didn’t like the design, they also didn’t like being surprised,” said Epstein, who works as an engineer and consultant.

They cited concerns about groundwater, traffic patterns and even whether the playground would be in the shade for much of the year as reasons to halt the project as currently designed.

The neighbors, primarily Epstein along with Martin and Deborah Hansen, formed the Friends of Inlet View Elementary School, in an effort to maintain the school’s footprint at the original northern site. Their slogan: “Pro Public Schools, Pro Public Process”.

They threw volleys of letters to the editor and attended every public meeting about the project they could. They say they were upset they weren’t consulted and no one in the district seemed to listen to their concerns about the new design.

“It was not a respectful dialogue,” Epstein said. “And that’s something that I think this neighborhood values.”

For their part, parents say they simply want their children to be in an adequate building. And they are tired of waiting.

“We just want it fixed,” said Juli Lucky, a former PTA president. “It’s been very frustrating working on this since my daughter is in first grade and now she’s in eighth grade.”

She also has a son who is in fifth grade and will probably never go to school in a new building.

Opposition appears to come from neighbors with no children in school, and even then only a few people, Wilm said. But she thinks they had an impact.

“Those who oppose it, even though they are a small group, are organized and connected,” she said.

Opposition sprouted when “we were trying to cope with COVID and burnt-out teachers, and it just seems very unbalanced, in terms of how much effort we’ve been able to put in,” she said.

The Hansens have lived in their home directly adjacent to Inlet View Elementary School for over 40 years. They profess to love school and see themselves as guardians of it – they even made their dog a little window in the fence, so he could indulge in his hobby of watching children on playground.

Some have accused the Hansens of being NIMBYs who want to stop reconstruction because it will bring the new school building closer to their home. They insist it’s not true, and they just see the design and process as so flawed that they feel compelled to try to prevent it from being built.

“This is something that is clearly wrong,” Deborah Hansen said. “And it’s a local issue, and it’s like, what can be more important?”

The couple’s opposition to the design has put them at odds with some of their neighbors. One of her adult son’s friends won’t even speak to the couple anymore, Deborah Hansen said.

After the defeat of the school bond became apparent, Martin Hansen received a text message from Fields, his elected representative in the Alaska Legislature.

“There is a special place in hell for people who oppose schools that neighborhood children need,” Fields wrote, according to a text shared with the Daily News. “We will keep Inlet View open despite your reprehensible attempts to close the school,” the text continues.

The post ended with Fields telling Hansen, “I strongly encourage you to leave South Addition. This neighborhood supports schools and if you don’t, you should leave – now.

“I couldn’t believe it,” said Hansen, a retired National Park Service employee who now moonlights as a cross-country ski coach and kindergarten teacher’s aide. “It’s a personal threat. Someone tells me I have to leave.

Fields said he texted a few days later to apologize for his choice of words. But he argues that he is just a passionate supporter of the school, and that opponents have been spreading misinformation to halt progress on a school design he sorely needs is backed by ” 95 to 97% of the community”.

He said he couldn’t think of another issue that put him so at odds with some of his own constituents.

“These five families have bizarre aesthetic concerns. … That’s why I don’t want to raise them,” Fields said. “They are not representative.”

“It’s so offensive to me that we would even question having a functioning building” for the students, he said.

“People got fiery and I wish that didn’t happen, but it inspired passion,” Wilm said.

The future of Inlet View School is unclear. The reconstruction design plan has yet to pass the Urban Design Commission, a city council that will hear the matter at its meeting in June. Money remains a question. The Anchorage School District will not say whether funds for the new school in Inlet View will be on the next bond cycle.

The district “has begun the process of finding next steps to address the significant safety, restoration and maintenance needs addressed by Proposition 1,” spokeswoman Lisa Miller said in an email. “Part of the research is also to understand why it didn’t work.”

Parents who pushed for the new school to be built find themselves on hold again. In the meantime, the adversaries have no intention of backing down.

“It gets old being called a fool all the time,” Hansen said.

Wilm says the experience tested his feelings in Anchorage, even about Alaska. She wonders what message the collapse of infrastructure sends to young people.

“I just don’t see this as a neighborhood that’s going to go away or that people are going to stop wanting to live here,” she said. “And it’s just sad to me that we have the most run-down school in town.”

As she walks her dogs around the neighborhood, she also wonders how to fix what has been strained between people.

“I feel some sadness walking in certain areas, some confusion,” she said. “Like, what happened?”